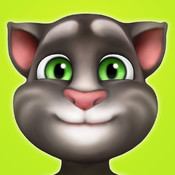 This is a simulation game in which players look after a tom cat kitten. It is one of a series of talking pet simulation games. Caution: in-app purchases, online interactivity, advertising

This review of My Talking Tom was completed by the Australian Council on Children and the Media (ACCM) on 11 March 2014.

This review of My Talking Tom contains the following information:

This game is one of a series of talking pet games. In this game, Tom the cat drinks some potion to make him a baby again. The player looks after their Tom kitten who, over time, grows up into a cat. The player must take the kitten to the toilet, feed him when he is hungry, put him to bed and turn out the light when he is sleepy and pat and play with him to make him happy. When the player rubs Tom’s tummy, he purrs loudly. Tom sometimes sleeps for long periods – players can use coins to purchase Energy Potion which will wake him up. When Tom has all his needs met, he will also repeat back what players say to him. Players begin with an allocation of coins, with which they can buy food and drinks (from a selection of both healthy and fast food). Players can also buy accessories like hats and glasses for Tom, change his fur and eye colour and decorate his rooms. Some items require many coins to buy or are only available at higher levels. Coins are awarded as the player moves up levels.

More coins can be earned by playing games.

Players may need to consider the wisest way to use their coins.

Players can connect to Facebook to earn coins, visit friends and let them come to visit. When players log in to Facebook, the game receives their public profile and friend list. Players can visit “random” players to earn coins – when players visit Toms, there is a treasure chest to tap on which opens up to reveal a prize. The in-app games have a Google+ Leaderboard which compares against friends’ scores – when players sign in to Google+, the game receives their basic profile information, list of people in their circles (which can be edited) and can  make the player’s game activity available via Google (can also be edited), share Google+ information and manage game activity.

None found in game. Ads for Slots games may be presented. An ad was presented which stated “Win $1,000,000 PLAY NOW” and took the player to a “free lotto” website

Ads are presented for other games, including simulated gambling slots games and war style games. Free coins can be earned by subscribing to the Talking Friends newsletter,  watching a video ad or playing in-app games (like Flappy Tom and Whack-A-Mouse). Players can also complete an “offer” to earn coins – this generally involves installing and running another game, which may include war style games. Players can click on a “For Fans” tab which takes them to a website where Tom toys and accessories can be purchased.

Tom is very discreet when using the toilet, though often makes funny noises like whistling or train noises.