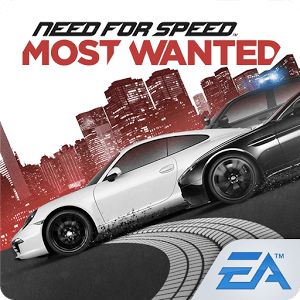 Need for Speed is a drag racing game.

This review of Need for Speed: Most Wanted was completed by the Australian Council on Children and the Media (ACCM) on 10 December 2014.

This review of Need for Speed: Most Wanted contains the following information:

This app was played for approximately 1.5 hours.

Need for Speed is a drag racing app where players work through a series of different racing tracks, earning experience, money and Speed Points to get better cars and battle the more difficult opponents. The objective is to win races against other in-game players, as well as battle friends online. The skills required to play include reaction time and motor skills.

The app opens to what appears to be a gang logo, followed by a title screen. The app then welcomes players to Fairhaven with an animation of a range of speeding vehicles racing around a track. Following this, the app requires that players begin to handle one of the cars in an automatically started race. They are informed that in order to steer the car, they must tilt their device from left to right (alternative settings allow players to tap the screen in the left and right areas in order to do the same thing). They are soon informed that swiping upwards on the screen causes the car to engage a powerful speed booster, whilst touching and holding the right-hand side of the screen engages an ability that allows the car to drift effectively around corners. The race contains six vehicles competing, including the player. However, there are other cars on the track at the same time that pose as obstacles. The player’s vehicle appears to only take a set amount of damage before the car is ‘wrecked’ and the race is over – it is possible to damage the car by running into walls, scraping along the sides or edges of the track, hitting other cars, etc.

After players finish the race, they are told to ‘Achieve milestones to earn speed points, which unlock cars and rank you against your friends on the Most Wanted List’. At the end of the race, players are informed of their final position and the amount of money they earned, in addition to the experience they gained. They then have the option of completing the race once more, or moving on to the next part of the game.

Next, players are encouraged to participate in the Time Trial, which is a race that involves players racing against a timer as opposed to other cars. If a player fails to reach the final checkpoint before the timer elapses, they receive no monetary or experiential rewards. Players must meet four individual checkpoints (having approximately 20 seconds to drive between each one) in order to satisfactorily complete the race. Players are told that there is also a function to depress the breaks by touching and holding the left hand side of the screen. Within this level, police vehicles appear that proceed to chase the player’s car and slow player’s down.

After a number of races, players eventually unlock a map of the districts within which they may click on a particular location in order to view the events in the area. More districts unlock as players progress through the game. New races are highlighted on the map with large glowing red dots. Some of the events are Class Restricted, meaning that players require a new vehicle in order to participate. The app informs players that if they do not have enough money to purchase a car, they may replay previous events in order to obtain more money. Within Everyday Street Racing races, it is possible to gain varying amounts of money if a player places 1st, 2nd or 3rd. Players are also encouraged to wreck police vehicles along their path by running into them, or pushing them into walls – when this happens, a brief explosive animation displays what happens to the police car, and players are given a considerable speed boost as a reward. After players have done this enough times, a pop-up screen appears to inform players that they have moved up the Most Wanted List, from #11 to #10. The text reads ‘You’ve made a name for yourself, but are you ready for a challenge? Beat JAPAN4 in a race of Everyday Skill to stake a claim on the Most Wanted List.’

It is possible to customize a player’s vehicles within this app also, upgrading them with various components that add points to acceleration, handling and speed.  The app contains a Dealership that offers a different high performance NFS Edition car for purchase every week – each car is available for a limited amount of time only. When entering the dealership, players are shown an image of a car alongside its name, brand, cost (e.g. $2,500,000) and statistics (including speed, acceleration and handling stats). The app also has a garage that contains the capacity to store 55 cars. Some of the cheaper cars are available at early levels, whilst others are level locked and may only be obtained via wining a particular event or obtaining a set level of experience.

Another page of the app contains Driver Details – this houses general information on the player, with a statistic of where they are placed on the Most Wanted list (this figure moves up the list as players progress through the game), as well as information on the number of awards won in different areas (such as single player, driver tests, social, etc).

The app contains a pop-up screen that appears early on, encouraging players to ‘Compete against your friends to be the Most Wanted!’. It requires that players sign in via Origin to do so. This pop-up screen appears repeatedly throughout the course of the game, after individual races are completed.

No gambling content found at the time of this review.

The nature of promoting speeding, unsafe driving, drag racing and a desire to be on the Most Wanted list (as well as viewing harming police in a positive light) may be detrimental to younger, impressionable players.