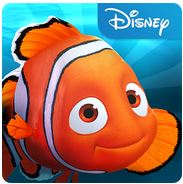 This review of Nemo's Reef was completed by the Australian Council on Children and the Media (ACCM) on 17 August 2015.

This review of Nemo's Reef contains the following information:

this app was reviewed to level 8.

Nemo’s Reef is a timer-and-quest building app based around the Disney film ‘Finding Nemo’. The objective of the game is to use resources and in-game currency to build an extensive reef – players must select items to place (such as rocks and coral), wait periods of time for these to process, and continually expand on their creation. The skills required mostly involve basic motor skills to use the app.

When the app is opened, players are asked to input a Profile Name, as well as their age. After this, there is a short animation of two fish (one of whom appears to be Nemo) swimming under the ocean. They approach a larger fish, and dialogue appears on the screen where Nemo states “Hey dad, guess what we learned about in school today?! Reef building!” He goes on to describe that he and his dad are going to build ‘the coolest reef in the class’. Players are then taken to a top-down view of the ocean bed, and multiple options are displayed around the screen. The player’s level is shown in the top left-hand corner, the amount of health they have is shown in the top right corner, and resources are shown along the top. When players click on any of the three resources (sand dollars, algae or pearls), they are taken to the in-app purchases store where they can buy more of each resource.

Players are then told that algae and sunlight are the secret to growing reefs, as algae and coral work together. Players must then tap on sections where algae appears to be present in order to collect it for the project – there is a brief waiting time before it is processed, and the algae may be tapped on and collected. Players are then directed towards the Nursery within the menu, in order to select the correct plants to grow in the reef. Different items within the Nursery cost different numbers of sand dollars to purchase, and they take different lengths of time to be placed. Players must select an item and place it exactly where they wish for it to go. After it is placed, players receive a reward of sand coins in return. In order to make the plant grow, algae needs to be used on it. There is a processing time that varies for each item, but this can be skipped and items can be processed instantaneously by utilising pearls (e.g. 1 pearl for a short period of time, but more pearls for longer processing periods).

Within the Nursery, there are different categories of items that can be placed. These include: Living, Coral, Ornamental, Rare and Specials. Throughout the process of building and adding to the reef, the game provides some informative facts to players that further the storyline (e.g. ‘Nemo has learned that an Ornamental Plant next to a Living Plant makes the home more attractive to fish’). The game goes on to encourage players to create ‘rocks and protective nooks’ for fish to hide in if they desire. Items that are placed continue to produce resources for players, and can be tapped on after a set period where they replenish themselves and can produce more sand coins, algae, etc. As players create more of their reef, they gain experience and thus level-up and unlock additional items.

The timer-and-quest nature of the app does appear to encourage players to make in-app purchases in order to skip waiting periods, which may be inappropriate for young users without supervision.

Players are able to connect via Facebook. They can also play with friends, by inviting people to play with them through Facebook/email, or by adding a specific known username. From level 12, a co-operative quest feature is unlocked where players can invite their friends to join missions and complete building quests together.

Pearls can not only be bought in the in-app purchases store, but they can be obtained for free by engaging in other game-related activities. For example, they can obtain pearls by watching video advertisements for other games (such as ‘Walking Dead: Road to Survival), by installing and playing apps to a certain level (e.g. ‘Download Westbound: Gold Rush and Complete Level 2), by visiting websites (e.g . Visit the Coles website), or by purchasing other products (e.g. ‘Receive 243 pearls, Get the skin cream celebs are raving about!’).