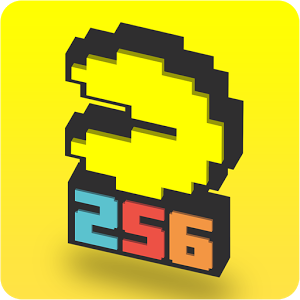 This review of PAC-MAN 256 Endless Maze was completed by the Australian Council on Children and the Media (ACCM) on 14 September 2015.

This review of PAC-MAN 256 Endless Maze contains the following information:

The app was played for approximately 1 hour.

PAC-MAN 256 Endless Maze is a fast-paced maze puzzle game involving characters from the PAC-MAN franchise. The objective of the game is for players to make their way through the endless maze, avoiding ghost enemies and collecting points and reward items. The skills required to play this app are dynamic visual acuity, speedy reaction times and general fine motor skills.

When the app is installed and opened, players are brought to a central home screen with a Play button in the centre. They are then shown a large black and blue maze, within which there is a small yellow Pacman character, as well as two blue ‘ghost’ enemies. Players are instructed to swipe upwards on their device screen with their finger in order to move Pacman through the maze.

Players can then swipe left and right in order to direct their character through the rest of the maze. They collect small white squares, which act as Points to increase their total score. They can also eat small power pellets that allow them to run through enemies without being harmed. Throughout the maze, players are continually met by an increasing number of enemies (all of which are different colours) – if a player runs into one of these, their Pacman is eaten and the level is over. Players are also able to run into items such as apples, which give them additional experience points. A player begins the game with 6 credit points – these can be used to continue a level despite having run into an enemy ghost. Once a player runs out of credit, they are unable to continue a level after dying once.

Players are shown their highest score at the end of a level. They can also view more detailed statistics, such as ‘coins collected’, ‘highest ghost chain’, ‘highest fruit multiplier’, and ‘pac-dots eaten’. They are also often given rewards in the form of items and power upgrades – for instance, players can unlock Lasers, which allow them to ‘shoot lasers that toast ghosts’.

Players are able to access the Pac-Shop, where they can double their existing number of coins in the game by spending $5.95 of real-life currency. This coin doubler is ‘endless’, and will continually double the coins that players obtain, thus meaning that they will likely always have credit with which to continue playing through failed levels.

At the end of each completed game, players are given the option to share their best score online via social media platforms such as Facebook, Email, Google+, etc. Players can also view a Leaderboard of highest scores, but must sign in via a Google+ account in order to do so.

Players are told that they can ‘Earn a Reward’ by clicking on a particular icon after the completion of a level – this takes players immediately to a full-screen video advertisement of other gaming apps such as ‘Clash of Kings’. Upon watching the video, they are given a number of extra credit points to use within the game.