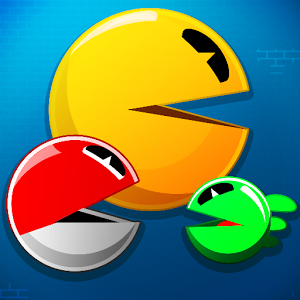 This review of PAC-MAN Friends was completed by the Australian Council on Children and the Media (ACCM) on 2 October 2014.

This review of PAC-MAN Friends contains the following information:

this app was played to level 15.

PAC-MAN Friends is a fast-paced tilt based puzzle game involving characters from the PAC-MAN franchise. The objective of the game is for players to collect points and rewards, as they move their characters through various maze puzzles. The skills required to play this app are dynamic visual acuity, and fine motor skills.

Once the app is opened, players are informed that they must choose a Google Play email account (or create a new account) in order to play the app. The game cannot be played without signing in. Players are then taken to a menu screen that contains a Play option, as well as an option to view other advertisements associated with external apps and other games.

The central screen of the gameplay is a large map depicting the various levels that a player is able to complete. Only the levels that have been played, and the single next level afterwards, may be open to players at any time – the rest are level-locked.

When players begin, they are given instructions on how to play the game – ‘Tilt your device and pick up every pellet’. Players can then select which controls they wish to have for their device – they may choose how much their device will be tilted during play, or whether they wish to only tap the screen instead of tilting it in order to engage in gameplay. Players must then guide their pacman through numerous mazes where they tilt up, down, left and right in order to collect items and complete the level. In later levels, players must pick up friends within the maze and move with them. They must also avoid obstacles or other creatures that kill them and cause them to require and use a cherry to save it. Players may avoid ghosts, or eat them by eating power pellets first that enable them to attack the ghosts. The mazes change and become more complex as the levels progress. After completion, players are given a ‘Level _ Completed!’ screen that displays the time it took them in seconds to finish, as well as a rating out of three stars in regards to how well they performed.

The app contains full-screen pop-up advertisements for external apps. For instance, games such as CoinDozer and Slots are advertised and must be manually closed after it appears. After the individual advertisement is closed, players still are required to manually close another list of advertised apps which encourages players to browse through ‘More Apps!’. Ads also appear at the end of each level completion during gameplay itself.

No game playing behaviour that may be of concern to parents was found during play.