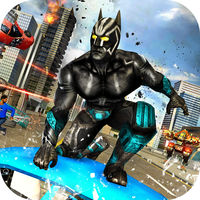 This is a third person shooter/beat ‘em up game, where the player verses attacking robots in a city. Players will need good coordination and fine touch skills to play. Due to ads featuring gambling, this game is not recommended for children under 12 and parental guidance for children 13–15 years.

This review of Panther Superhero was completed by the Australian Council on Children and the Media (ACCM) on 9 April 2018.

This review of Panther Superhero contains the following information:

The reviewer played this game for several hours.

Panther Super Hero City Battle is just that; players control a super hero (not to be confused with the Black Panther from the Marvel franchise), in order to save the city from large, evil robots. There is an on-screen joystick which controls viewing direction and movement. There are also 5 buttons on the right; missiles, turret, jump, hit and switch (which toggles the player between changing into a ball, riding a bike and normal man mode). There is also a jet pack button which allows flight. Players must find the robots (by using the map – top left of screen) and destroy them. The current reviewer encountered many pop-up ads between screens – the ones that you have no choice watching before the 20 second count down – some of which were ads for slot machine apps. Therefore, parental guidance is recommended for children aged 13 – 15 years.

Controlling this game is quite difficult. The onscreen touch is extremely sensitive, so any kind of movement is hard without over extending. For example, there is a very fine line between walking forward and looking up into the sky. Keeping aim on the robots is also very hard for the same reason. The reviewer found that simply lifting your finger off the screen threw the aim off the robots.

The game is also very one dimensional. Travelling the city and destroying robots was the full extent of the game. For the above reasons, it would be anticipated that many children wouldn’t stay with this game for very long.