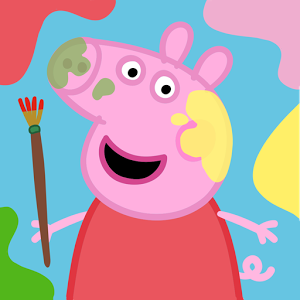 This review of Peppa’s Paintbox was completed by the Australian Council on Children and the Media (ACCM) on 23 September 2014.

This review of Peppa’s Paintbox contains the following information:

This game does not feature pre-set levels – however, the entire app was played for this review.

Peppa’s Paintbox is a drawing application that enables users to create pictures and artworks of their own design. The objective is to create as many artworks as desired, through utilising the various artistic tools (e.g. paintbrushes, stamps and stencils) available. The skills required to play are creative and visual predominantly, as well as motor skills being needed to functionally use the app.

When Peppa’s Paintbox opens, users are given a visual choice of choosing to play and ‘paint with’ either Peppa or George – Peppa is a pig wearing a pink dress, while George is a male pic wearing a blue tshirt. A voiceover suggests that users chose from the two characters also. There is additionally a small cog icon in the top lefthand corner, which opens the settings of the app – this has links to switching the sound on or off, a ‘help’ button, as well as a ‘home’ button.

After players select a character, they are taken to a blank canvas – there is a scrolling bar down along the bottom of the screen containing various options, and Peppa or George enter the screen from the lefthand side briefly on occasion to giggle and encourage users to continue playing. The first option the game is set to is a paintbrush – there are seven colours to choose from, and players may elect one or a range of these and then drag their finger across their device screen in order to draw thick coloured lines.

In regards to the other options, players are also provided with an eraser that they may use to rub across areas of the screen with their finger in order to blank out parts of the canvas that they have coloured in. They also have the option of choosing from one of seven different coloured paint buckets – when players tap on the canvas in this setting, a large blob of colour appears. However, when they click and drag with their finger, the stream of colour begins quite thinly, and gradually widens to fill the entire canvas – this enables players to quickly fill the entire background of the canvas with specific colours they may want.

Another option is one that allows players to utilise pre-made patterns and objects, and place them anywhere on the canvas as decoration – these include bubbles, blobs of mud, small sparking stars, or musical notes. When a user places any of these, a small item-appropriate sound effect is also heard.

A similar option allows players to place individual stencils of a range of pre-drawn characters and objects. There are thirty-nine to choose from, and they range from elephants dressed as doctors and pigs dressed as police men, to images of red buses, trains, and helicopters. There are additionally three pre-designed full stencils that users may colour within the lines of.

It is possible for users to save their final artworks, and then have them displayed in a portrait on a exhibition wall at Peppa’s school.

The app does not appear to pose any overt risks to children, and may provide a fun way of practicing spatial/visual skills as well as encouraging creativity and artistic design in young children.

Peppa is dressed in a pink dress, whilst George is dressed in a blue tshirt. This may reinforce the gender stereotypes for young children that certain colours and articles of clothing may only be worn by certain genders.