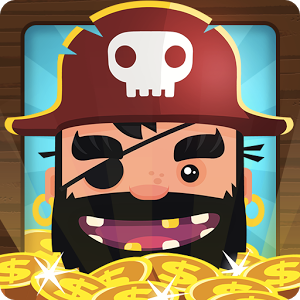 This review of Pirate Kings was completed by the Australian Council on Children and the Media (ACCM) on 10 March 2015.

This review of Pirate Kings contains the following information:

This app was played to level 5

Pirate Kings is a gambling-simulator app that centers on spinning a wheel in order to obtain in-game currency. The objective of the game is for players to gain as many coins as possible, and to utilise these to build increasingly complex islands for themselves. They may upgrade these islands if they receive more coins. There are limited skills needed, as it is a simple button-push game and the chance of winning or losing is largely chance-based.

The app opens by asking players to sign in using a Google+ Gmail account. They then have the option of starting a new game, or to sign in via Facebook and continue a previous game. Players are presented with an animated scene of an ocean – there is a large red button in the centre, and players are told to press it to begin. Pushing this button spins a wheel called ‘Cashking’. Around the wheel, there are various rewards that a player could gain; some of these include more spins, whilst others are monetary rewards in the form of in-game currency (eg. $5k, or $100k). Players are asked to spin the wheel several times, before they move on and are given their own ‘Island’. The island comes with its own store, where players can purchase items for it such as boats, people, plants and trees, etc. These range in cost from 75,000, up to 450,000.

After players make a purchase for their island, they earn themselves more spins of the wheel. The nature of the wheel, and the manner in which this reward system is encouraged, greatly simulates gambling. If players receive ‘Revenge!’ on the wheel, they have to choose another pirate to attack. They can elect which part of another pirate’s island they wish to destroy with their large canon. For instance, tapping on the icon of a ship will destroy it and offer the player a monetary reward ($300,000).

One of the other features is the Pirate Steal, where players must ‘find the cash king’ on one of 3 islands. This involves players tapping on an island, and if they choose correctly, they will win large sums of currency by ‘stealing’ from other pirates. There is also a ‘Daily Bonus’ activity, where players can spin a slot machine in order to win a potential reward.

Players may receive free spins on the wheel by watching video advertisements – they are full-screen ads and cannot be closed until they are completed, if a player wishes to receive the free spin reward. These ads feature apps such as Wheel of Fortune (gambling content present), Agent Alice (mature themes and crime), and Clash of Kings (violence and war).

There is a leaderboard of players and their scores (e.g. number of blue stars collected within the game). Leaderboards can be viewed globally, or just between friends playing the app together.

This app carries considerable risk to children due to the substantial amount of simulated gambling involved. The app is based around a wheel-spinning reward system, where players must spin the wheel in order to gain in-game currency. There is limited learning potential as the game is very simplistic, and is mostly chance-driven.

Players are asked to sign in via Google+, and are also given incentives to sign in via Facebook – these take the form of 50 free spins of the wheel, extra cash, and other in-game rewards. Players also have the option of inviting friends by connecting to Facebook.

Players may receive free spins on the wheel by watching video advertisements – they are full-screen ads and cannot be closed until they are completed if a player wishes to receive the free spin reward. These ads feature apps such as Wheel of Fortune (gambling content present), Agent Alice (mature themes and crime), and Clash of Kings (violence and war).

This app contains simulated gambling content. Not suitable for children.