Pirates of the Caribbean - Disney 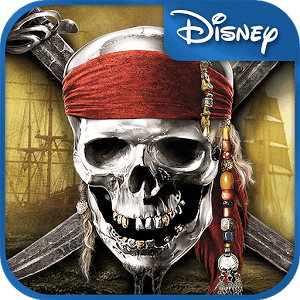 Pirates of the Caribbean is an exploration and adventure game where players may roam the sea in order to find islands, complete quests and battle other ships.

This review of Pirates of the Caribbean was completed by the Australian Council on Children and the Media (ACCM) on 24 June 2014.

This review of Pirates of the Caribbean contains the following information:

Pirates of the Caribbean is an app which allows players to build a ship with decent defence and a good crew, sail the seas to complete quests and master islands, as well as collect loot and gems. The objective is to master all of the 21 available islands, as well as collect as much loot and experience as possible. The skills required to play are spatial/visual and motor skills, predominantly in relation to the ship battles players may complete.

When the app opens, players begin by entering their ‘Pirate Name’, which they manually type. They are then given the option to choose from a selected range of pirate flags. After this, Captain Jack Sparrow appears in the corner of the screen to welcome the player. He explains that ‘gold is a pirate’s lifeblood’, and that players ‘must make course for the Sunken Island in order to find some’.

The app involves playing through various quests – these include things such as ‘Mastery Progress: Lure away the ghostly crew by telling them the Flying Dutchman has docked nearby. Then loot the ship’s holds and run like hell,’ as well as  ‘The Ghosts discover your lie and vow grisly revenge. Escape to a nearby Chapel.’ Each quest costs players some energy, but earns them monetary rewards. The quests complete themselves, and players are merely required to start them in order to earn money and also level up. Each time a quest is completed, players will receive information on what level they are, how much gold they have, how many gems they’ve obtained, and what bonuses they earned. Each time a player levels up, they obtain skill points that can improve their standing within the game.

Players are told that there are 21 islands that may be mastered. When a player masters all the quests on an island, they become Master of the Island. When they master all of the islands, they become the Master of the Seas. Players may use their finger to swipe across the map to survey the islands, although many of the islands are level-locked and may only be explored once a player reaches a certain level within the game. Players also ‘hire a crew’, allowing them to put more of their weapons and armour to use thereby making them a more powerful opponent.

At the top of the screen, players have stats on their energy levels, stamina, health, gems, and amounts of gold and experience. It is possible for players to use their in-game gold to purchase items that will improve the ship’s defence and attack (e.g. ship canons). When out at sea, players may click on nearby ships to see it’s attack/defence stats and determine if they wish to battle it. Players may test their skills during a battle, or set the app to ‘Auto-Battle’ and run by itself. When battling manually, players must use their reflexes to change their sailing speed in order to avoid enemy fire, and also blast their own canons at the right moment. It costs either gold or gems to repair a ship after a battle.

Earning Gems will allow players to not only purchase certain items, but also to refill their energy, stamina and health, as well as repair their ship.

The app has a full-screen pop-up window that suggests players connect via Facebook, so that they may battle their friends and add them to the crew. The app offers in-app purchasing options in relation to gems. Players may purchase as few as 22 gems for the price of $1.99, 115 gems for $9.99, 580 gems for $49.99, or 1200 gems for $99.99. It is possible to earn gems for free by watching advertisements for other apps and games, by downloading and installing various games (which will earn players more gems than merely watching advertisements), or playing other games to a specified level.

The app does not pose any overt risks to children, but parents should be aware of the potentially expensive in-app purchases that the app makes available. It may also be important to discuss the nature of the animated violence with younger players, in addition to the references to alcohol that appear.

The app has a full-screen pop-up which suggests that players connect via Facebook, so that they may battle their friends and add them to the crew.

No game playing behaviour that may of concern to parents was found during this review.