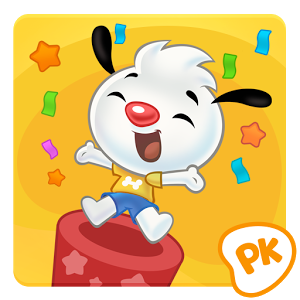 Playkids Party- Fun Games and Activities for Children is a series of mini games for children.

This review of Playkids Party- Fun Games and Activities for Chldren was completed by the Australian Council on Children and the Media (ACCM) on 29 May 2016.

This review of Playkids Party- Fun Games and Activities for Chldren contains the following information:

This game was played for a minimum of 30 minutes

The player is able to play mini games against the system in their device. The more games the player wins, the more games become unlocked.

To begin the game the player is able to choose a character to play as and to use an identity throughout the game. Once they have selected their character, they are introduced to a room with many game options for the player to choose. As the player wins games, they receive coins. With these coins they are able to purchase items within the game, eg outfits. Throughout the game the player is able to change the character’s outfit if they wish, however, only certain clothes are available free of charge, those that aren’t free charge can be purchased with the coins that the player wins in the game. There are also outfits that are locked within the game until the player unlocks them by winning a certain level of game. Within each section of the room, there are mini games that the player’s character will go into and then can play. Each game has different skills for the player to learn, for example, there are accuracy games, direction games, speed ability games, etc. For example, one of the games requires the player to control their character to move across the screen. By tapping the screen to jump, or by sliding their finger across the screen, the player is able to move their player accordingly through different missions that are set in the course. Another game allows the player to aim and shoot coloured bubbles out of a “bubble shooter”. The aim of this game is to eliminate all the coloured bubbles. The player’s task is to aim the coloured bubble at others of the same colour, when three or more of the same coloured bubble connect, the bubbles disappear. The player continues aiming and shooting bubbles until all of the bubbles are gone.

As the player wins each mini game, they unlock a new level of that game or something special within the game, eg a new music choice to listen to or a new outfit for their character to wear.

As the player plays more games and unlocks new levels, new games and specials are unlocked for the player.

One aspect of the game that could be reassuring the parents was the ability to change the settings depending on the age of their child. As a parent, they are able to create their own free account and manipulate the settings to better suit their child. To open the settings page the parent must enter the correct code which is presented to them on the screen. With this access they are able able to track what their child has learned, receive special articles by the game developer and use the same account in other apps, share their profile and preferences across multiple applications created by the same company.

Yes: A player can purchase games/levels that they have not yet won for prices ranging between $3.00 and $6.99