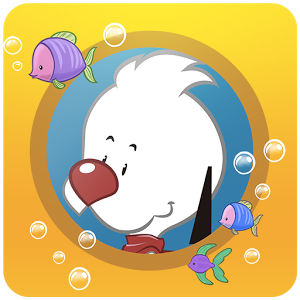 PlayKids is an interactive animated childrens game that contains activities as well as videos. Caution: in app purchases

This review of PlayKids - Videos and Games was completed by the Australian Council on Children and the Media (ACCM) on 10 May 2015.

This review of PlayKids - Videos and Games contains the following information:

This game does not feature pre-set levels – however, this app was played for 2 hours

PlayKids is a children’s app that incorporates activities and videos. The objective is to play through a range of activities (e.g. colouring in, matching puzzle games, etc), and to watch the small episodes of educational videos. The skills required to play include motor skills, memory, geometric skills, creativity and problem solving.

When the app loads, it presents a screen that takes place in an underwater setting. There is a small yellow submarine with a white dog inside of it, who occasionally waves at players – tapping on the dog causes it to raise a periscope above water in order to view a man who is jumping up and down on a nearby island. Players are also able to tap on another small submarine just behind it, with the text ‘Let’s play!’ positioned on it. This takes players to another screen inside of a yellow-coloured room – there are multiple things to tap on, such as a picture on the wall, a basket of food, etc. When players tap on the star hanging on the wall, they are taken to a new screen containing a collection of stars in the sky. A man’s voice tells them to ‘Connect the stars to make fun pictures’. Players may then click and drag to connect various stars in different patterns and shapes – players are guided as to which stars they connect, and small musical notes play as each one is connected. The stars eventually transform into a visual image of an object (e.g. a spaceship, a young girl, a sail boat, etc).

When clicking on the basket of food, players are presented with an option of 4 items to choose from – a loaf of bread, an ice cream sundae, watermelon, and a bunch of grapes. Players are then presented with a square puzzle shape outline broken into segments, in addition to several puzzle pieces randomly within the screen. Players are then required to click and drag these three puzzle pieces into their appropriate location in order to recreate the image of the food. After completing it, players are given a reward of three stars, as well as a small Congratulations message. Some of the levels in this are locked – upon clicking on them, a pop up screen appears which states ‘Grown ups: To continue, press FOUR, FIVE, EIGHT’. When players do this, they are presented with the option to subscribe and purchase the PlayKids Premium package – it is a seven day trial, and can be subscribed to for $8.99 a month.

Another item that can be clicked on within the yellow room takes players to a matching game. This involves a number of cards being placed facing downwards, and players can tap them in order to turn them over. Players must find and click on the same two images in succession in order to match a pair.

The app includes another click-and drag identification game, based around the concept of putting toys back in a children’s box. Players are presented with the silhouetted outline of an object that is lying nearby – they must then drag that item and place it over the outline which is inside the box, in order to store the item away.

Another feature of the app is a musical keyboard, where players have the ability to choose from a range of sounds. They can select not only various sounds, but also animal noises, read-aloud numbers and colours, etc. Players can also play along to various musical tunes, in which coloured dots appear on the piano keys and players must tap along in order to play the particular musical notes presented.

The app also contains a colouring book feature, where players may select from a range of stencils, choose various colours and tap to fill in certain portions of an image with various colours.

Within another section of the app, players are able to watch short videos (narrated by Stephen Fry) that follow a young male character. These are animated and contain short storylines of up to 30 minutes, and contain no inappropriate material. The character represented is called Pocoyo. Only one video is available to players, without purchasing the upgraded Premium version of the app. There are additionally videos about another character named Olive the ostrich, Jim Jenson’s Pajanimals, Bert and Ernie from Sesame Street, Thomas the Tank Engine, as well as a whole range of other characters. The content of these videos is largely educational (e.g. singing the alphabet), or adventure story-based.

Yes: Some of the levels and videos in the app are locked – upon clicking to open them, a pop up screen appears which states ‘Grown ups: To continue, press FOUR, FIVE, EIGHT’. When players do this, they are presented with the option to subscribe and purchase the PlayKids Premium package – it is a seven day trial, and can be subscribed to for $8.99 a month.