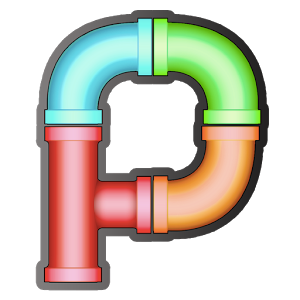 This review of Plumber was completed by the Australian Council on Children and the Media (ACCM) on 11 August 2014.

This review of Plumber contains the following information:

This review focuses on levels: 1-6.

Plumber is a free and simple puzzle game. The objective is to prevent a flood from occurring – this is practically achieved by turning different pieces of pipes by clicking on them, connecting them together in order to form a complete pipe. After a pipe is created, players are able to reduce the overall water levels. The skills involved include spatial thinking, motor skills and problem solving.

When the app is first opened, players are presented with a pop-up advertisement for another app. This must be manually closed. After this, they are taken to the central menu screen for the app – they have the options of clicking ‘Play’ or ‘More games’ (this takes players to a list of other free apps made by the same developers). There are two game modes that players may explore: arcade mode, that enables players to adjust as many pipes as they can before the water overflows; as well as challenge mode, which involves a series of 200 levels of varying difficulties.

Within Arcade mode, players must tap on pieces of pipe in order to turn them and complete a full pipe. They are unable to move locked pipes that are randomly positioned, which provide an additional challenge within the game. If players move pieces in a certain way, they may complete a ‘Combo’ and have their score doubled. Some of the pipes are T-shaped with three openings, and others are curved with two openings. Once a player creates a path that drains some of the overflowing water, the length of piping involved disappears and different piping replaces it. Players may progress through the levels, but if there is a flood and they are unable to create enough complete pipes in time, they are pushed back to Level 1.

In Challenge mode, players are presented with a list of 110 ‘Worlds’, with a percentage score currently at 0% for each of them. Upon clicking on the first unlocked world, players discover that there are 20 levels to play through within each world of increasing difficulty. If a player is having difficulty with a certain level in regards to which pipe to move, they may ask for one hint per hour to assist them. Within challenge mode, the rewards are time-based – players will obtain more stars and a greater score at the end if they complete the level within a shorter amount of time. As time goes on, players will lose gold stars.

There is an option on the main menu screen that takes players to the Faebook page of Magma Mobile, which they may then ‘Like’. Players also have the option to ‘Share’ Plumber as an app via a range of means, including Facebook, Messenger, SMS, Gmail, Google+, and other networking mediums that the player has installed on their device.  A pop-up also appears within the game that asks players if they would ‘want to publish your high score on Facebook’, with ‘Yes’ or ‘No’ options presented.

There is also an advertisement in between each completed level within Challenge mode, and these must all be manually closed. On the main menu screen, one of the options along the bottom is a randomised advertisement generator that players may click on and be transported to a different game within the Google Play store each time – these apps are all made by the same developer.

None found in the game but some ads contained sexualised images.

No game playing behaviour which may be of concern to parents was found during the reveiw.