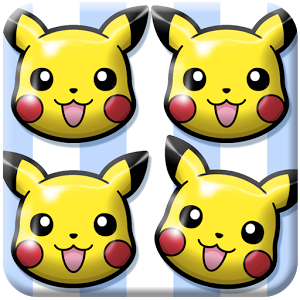 This review of Pokemon Shuffle was completed by the Australian Council on Children and the Media (ACCM) on 23 September 2015.

This review of Pokemon Shuffle contains the following information:

Pokemon Shuffle is a match-three puzzle game where players slide images of items across the screen in an effort to match three or more of the same kind, and create cascading combinations of items – this subsequently strengthens their team of pokemon characters. The objective is to play through the multiple levels of increasing difficulty, learning new combinations and matching more items where possible. The skills required to play are spatial/visual, lateral thinking, and problem solving.

When the app is first opened, players are asked to enter their age. From here, there is a small pop-up warning stating that players may use the application without paying money, but that there are in-app purchases within the game. From here, players are taken to a menu screen with the title of the app, a large Start button, as well as an advertisement banner in another language along the bottom of the screen. Upon pushing ‘Start’, players are asked whether they would like to begin a new game, or to transfer an existing game over to continue. Players must then read and accept the terms and conditions of the app, and are then able to continue through to gameplay.

Players are brought to a screen that shows a top-down view of a harbour side village called Puerto Blanco. They are welcomed by a female character named Amelia, who states that the players are the new trainer on the island. After a brief conversation, Amelia states that she sees an Espurr (a breed of pokemon) in the distance. Upon clicking on the creature, players are able to see that it is a Psychic type pokemon, and that it has 8 moves it can make. The app also highlights that players have 5 lives to begin with – every time they start a battle, players utilise one heart. These hearts regenerate every 30 minutes, however.

From this point, players are thrown into a ‘battle’. In order to capture the wild Espurr, players must line up pokemon within the bottom puzzle grid in order to attack it, thus reducing their opponent’s health to zero. In order to line up the pokemon, players must match three of the same type of pokemon in a row. Players must do this in a set number of moves in order to be successful. If they can match up multiple sets of three pokemon of the same variety, players will gain combo rewards. Players can move the pokemon to any other location within the grid – they do not just move to adjacent boxes. After a player has won a battle, the opponent pokemon is weak and can be captured. The game displays the catchability percentage of each pokemon, and players must then tap on their pokeball in order to attempt to capture it. If it is captured, it becomes part of the player’s team. After a battle is won, players are taken to a screen which displays their reward of gold coins, as well as their score, and current rank if they have levelled-up.

With each level, a new pokemon must be battled and captured. Coins can be exchanged for items that assist players during battles. For example, players can purchase packages of extra moves (e.g. 5 extra moves, for 1000 gold coins), extra experience points, etc. Captured pokemon, such as Espurr, will earn experience points as a result of battling and capturing other higher-level pokemon. Within pokemon games, each pokemon is a different element – for example water-type pokemons may be defeated more easily with grass or electric-type pokemons.

The game also contains a Shop where players can buy extra hearts and gold coins in exchange for jewels. For example, 6 extra hearts cost 1 jewel, 20 extra hearts cost 3 jewels, etc. These jewels are the in-app purchase within the game, and can be bought for real-life money.

The app does not appear to pose any overt risks to children, and aside from risks associated with in-app purchase, it may provide a fun way of practicing spatial/visual skills as well as basic geometric and problem solving skills.

When players are taken to the home screen of the app, there is a banner advertisement along the bottom of the screen – it contains a Nintendo3DS advertisement written in another Asian-style language.

No overt risks were discovered during this review.