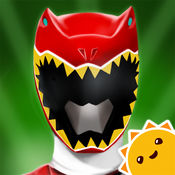 Power Rangers Dino Charge Rumble is a good vs evil fighting game. Players are guided through a series of animated comic books and play begins when enemies are presented. Fine motor skills and fast reaction times are required to play. Caution: ACCM recommends parental guidance for children aged 5 – 12 due to mild violence and use of weapons.

This review of Power Rangers Dino Charge Rumble was completed by the Australian Council on Children and the Media (ACCM) on 14 May 2017.

This game closely follows the plot of the popular TV show of the same name; the power rangers keep the earth safe from an antagonist name Sledge – who sends waves of monster-like humanoids to Earth to fight the rangers.

The app portrays this story in a series of animated comic books. Each comic book is a separate level. Interactive game play commences when the power rangers need to fight the monsters. Players can choose between all 5 power rangers who are all present at each fight. Upon choosing a power ranger, you have the choice to punch, kick, use a sword or use a gun. Each attack mode requires a different action (e.g., to kick, the player must quickly tap below the power ranger’s feet until the greatest power level is reached within the short time frame). Some attacks are easier than others, but most require quite fast reaction times and motor skills. Due to mild violence and the presence of swords and guns, parental guidance is recommended for ages 5 – 12.

Although this is a fighting game, there is no actual physical contact between the fighters. When either power rangers or monsters execute an attack, the move is done at a distance – then a power surge transfers from the attacker to the recipient.  This may be better for children who like to mimic behaviour in general play. However, the use of the gun is reflective of how one would use it in reality. There is a strong moral emphasis on being good, and looking out for your friends but some parents may not be comfortable with the “fighting as a solution” mentality, particularly with the justification of using weapons for this purpose.

Parents can monitor this app through the parents section, which includes the ability to adjust settings such as in app purchasing and difficulty adjustment. Children could easily access this though and enter their parent’s social media apps (such as Facebook and Twitter) – if these haven’t been logged out of.

Some children may become frustrated with the fast reaction times it requires to execute some attacks and recover from monster attacks.  When a power ranger gets hit by a monster; up to 5 balls of energy rise from the power ranger. Players must quickly tap on each one before they disappear. This will recover life energy. Thus, those who lack in co-ordination and fast reaction times may have trouble getting past some levels.

In all Power Ranger games, although the female characters are seen as equal fighters to the male Power Rangers, they wear colours that are stereotypical to the female gender (Pink and Yellow).

Some parents may not be comfortable with the fighting nature of the game, particularly with the use of swords and guns.