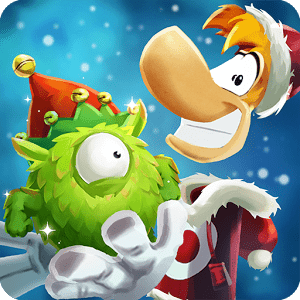 This review of Rayman Adventures was completed by the Australian Council on Children and the Media (ACCM) on 4 January 2016.

This review of Rayman Adventures contains the following information:

This app was reviewed to level 8

Rayman Adventures is a side-scroller adventure game. The objective of the app is to play through obstacle levels, collecting more creatures and earning rewards by completing levels. The skills required to use the app include problem solving, lateral thinking and motor skills.

When the app opens, players are asked to sign in via a Google+ Account before beginning gameplay. The app then welcomes players with a Privacy message they must accept in order to play. This takes players to a central home page, containing a logo in the centre as well as multiple other icons. There is a large Play button in the centre, as well as a Facebook icon to the Rayman Adventure’s Facebook page (signing in via Facebook allows players to save their progress over multiple devices), and an icon that takes players to the Rayman ‘Channel’ (which contains several videos featuring the characters from the game).

Upon starting a new game, a brief animated video is shown. There are several pirate characters in a forest, who then jump on their flying pirate ship. After this finishes playing, users are asked to select a hero from one of two characters – this character then falls to the ground and becomes a user’s character. The game instructs players to swipe to the right in order to start – this causes their character to run down the hill within the side-scroller style game. They then run into obstacles such as raised platforms and the game informs players that they must tap the screen in order to jump. As the level continues, players must also swipe to the left in order to change direction and keep their character moving. Players additionally have the ability to swipe forward in order to attack. The goal of racing through levels is to free creatures that have been trapped within eggs. Upon cracking the eggs open, players earn new creatures/characters to assist them in future levels. The basis of the game involves completing Exploration Levels where players must run through various obstacles in order to reach the eggs, where friendly creatures have been trapped.

The game has other game play components, such as ‘Seekers’. Seekers are creatures that travel with players as they move through levels and can find up to 3 secrets for players. The more seekers that a player has with them, the more secrets they are able to find. The layout of each level becomes increasingly difficult as the game progresses, and players must utilise problem solving skills and lateral thinking in order to complete them. At the end of a level, players receive rewards in the form of total points, health, and blue gems. Blue gems can be used to speed up waiting times for opening the eggs, or to purchase character upgrades within the game. Players can also choose to share their score via Facebook with their friends.

It is possible to watch video advertisements within the game in exchange for glue gems. These video ads are for similar apps, such as Dungeon Boss (mild animated violence), Clash of Clans, etc. These full-screen ads cannot be stopped once they are started and must be played to completion. Players are only able to watch two videos at once.

No game playing behaviour which may be of concern to parents was found during this review for the 13+ age group.