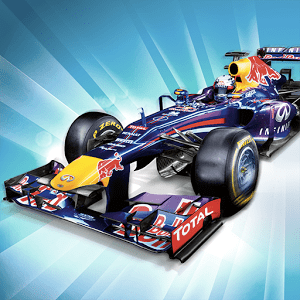 This review of Red Bull Racers was completed by the Australian Council on Children and the Media (ACCM) on 28 April 2014.

This review of Red Bull Racers contains the following information:

Red Bull Racers is an animated arcade runner where individuals play through various levels of increasing difficulty. The objective of the game is to play through and win as many races as possible, in order to earn money and rewards that enable players to upgrade their car or cars. The skills needed centre mostly around reaction times.

The game throws players straight into gameplay, showing them how to race via a beginner track. It demonstrates the button that players will need to use to accelerate and break, and shows that players will run off the road if they accelerate too fast through corners. Players are also able to switch lanes when another car is nearby. At the end of the race, players are given a trophy if they placed 1st, 2nd or 3rd. Details are also given in regards to the total time it took to finish the track, their ranking with other drivers, as well as the reward cash won and XP gained as a result. The game tells players the model and make of their car (e.g. Formula Kart 250cc), as well as the level the player is currently at.  When players go up alevel, they receive a gem and can also unlock new and upgraded cars to use within future races.

Players then select a Formula series, as well as a difficulty level (which can be chosen from Beginner, Amateur or Pro). The two higher difficulties are locked until players reach a certain level and obtain more professional cars. There are also different tracks that can be selected – players may play in a speed ring cup, an elimination race or a track with rivals. Before each race, it is possible to upgrade the car being used. There are sometimes free boosters, but other features (such as stabilizer breaks as well as quick recovery options and the ability to knock opponents off the street) need to be purchased with either in-app currency or with gems.

There are a list of objectives that span across the races within the game – some of these include completing 100 laps, pushing 20 opponents out of the track, knocking out 5 opponents with a lane switch, getting 100 perfect corners, finishing 1 lap with a perfect rating, upgrading 1 car, beating 5 friends in a rivals race, etc. By completing these objectives, players will receive a reward in the form of gems.

In regards to the gameplay itself, races offer a birds-eye view of the racetrack. Players accelerate during straight parts of the track and must lift their finger off the accelerator when going around corners – if they do not do this, the car will fall off the track. However, it is possible to purchase an Automatic Recovery feature for the car which will reduce the time lost when this happens. As players progress through the game, they unlock future events which contain new cups, eliminations and rival tracks. These are unlocked with different cars and in different locations (e.g. in the Lost Ruins). The car’s fuel gauge also diminishes with each race played – players can either purchase in-game currency to refill it quickly, or wait for it to gradually refill on its own.

In order to buy more in-game currency, players can purchase a select range of packages from the store. Within the store, it is possible to buy sets of gems. Players may purchase these packages with real-life money, which range from 75 gems for $3.34, up to 1,400 gems for $44.70.

The game asks players to sign in with their Google+ account. It is also possible to sign in via Facebook in order to play with friends and therefore, unlocking further achievements and compete for higher leaderboard scores.

There are no advertisements present within the game.