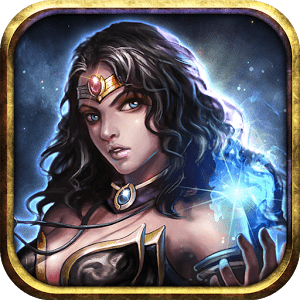 This review of Reign of Summoners 2014 was completed by the Australian Council on Children and the Media (ACCM) on 28 April 2014.

This review of Reign of Summoners 2014 contains the following information:

Reign of Summoners is a card battle game that enables players to collect a range of cards and use them to defeat enemies. The objective of the game is to obtain more cards, and to evolve and enhance their attack and defence in order to create more powerful ones. The skills needed centre mostly around strategy and problem solving.

Upon beginning the game, players choose an account (they are able to select the Default account, or a Facebook account), and a server (e.g. S1 Alfheim). Players then begin the tutorial process, within which there are ten steps. They encounter several Masked Men: a man of judgement, another of doom fire and a third of lightening annihilation. The player’s character comments that his hands are in pain and demands to know with whom he is speaking. The masked men comment that the protagonist has the ability of 'summoning'. Players are then encouraged to use the ‘Summon’ feature along the bottom of their device screens and are then given a choice of summons they may use. A player may use a normal summon, which costs 20 purple orbs; a rare summon, which costs 1 gold scroll or 80 gold blocks; as well as a super summon, which is obtained using 9 rare summons.

Players are then sent on a quest – they begin with a full Energy bar, and empty bars of Progress and XP which progressively fill. As a result, they win cards with pictures of characters on them. When the progress bar is filled, players receive a message that tells them that the quest has been cleared.

The app then teaches players about evolving – the Masked Men state that evolution is what makes a player’s cards go to a higher form. This is done by merging two of the same cards together. After this, it is possible to enhance cards to higher levels.

Players are then shown a boss fight, with the example of a minotaur. Stats are given on the creature’s attack and defence, as well as their own player’s attack and defence (of their playing card), in addition to a red globe of 100% Health. Players simply tap the screen to battle the boss, which they will defeat if their card is more powerful. Once defeated, the game offers rewards in the form of XP, Coins, Orbs, as well as extras such as Energy Water.

Players then discover the names of the masked men: Wizard, from the Believer race; a Reaper from the Hellion race; and a Drow from the Outcast race. Players are then asked to choose one of the three races for themselves. Upon choosing a race, players receive two cards for free. They are then told that they need to learn the most important thing – Clan War. During this type of battle, players must select one of their cards to attack an enemy. It is possible to send multiple cards out to attack, and certain combinations can activate card skills. The app then encourages players to join a clan, or create their own clan.

Players are additionally encouraged to enter the referral code from a friend, in order to receive another gift (100 orbs and 30,000 coins).  There are also daily bonuses, including things such as 5,000 coins.

There is a chat component where players from all around the world may engage in live chat with one another. The chat forum appears to be largely un-moderated. Within this, there may be some coarse language from other players – for instance, one player wrote ‘Autocorrect is a bitch at times’. It is also possible to private message or ‘PM’ other players, which may leave younger players open to inappropriate material or relationships.

There is advertising in regards to in-app purchases related to the game itself, as well as advertisements for external apps or products. The app advertises an ‘Apprentice Packet’, and makes the package appeal to players by stating that there are only 20 to be sold, and that it is a one-time purchase only.

Of the masked people, two are male and one is female. The men are both fully clothed in robes, while the female appears to be wearing a bra and cape – her top half is largely uncovered. On some of the individual cards themselves, there is further nudity of females in particular. Male characters are often adorned with heavy armour, whilst there are women who are entirely topless with the majority of their breasts exposed.

Some of the themes and dialogue within the app are quite violent in nature. For instance, players run into mercenary characters that inform the protagonist that they will ‘feel the blades puncture (their) thick hide, as (he) slices (them) like the weakling (they) are’. This may glorify violence and the notion of hurting other individuals for younger players. However, the violence visually presented is minimal – when battling, players merely tap the screen and red slash lines appear across the device. The battle portion of the screen shakes slightly until the battle is won.