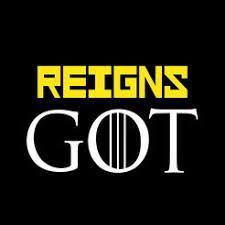 This app is a simple card game based on the Game of Thrones TV series. Requires reading skills at 6th grade level (Aus). Not recommended for children 14 and under, and parental guidance for adolescents aged 15 – 16 (suggestive themes, violence and crude humour).

This review of Reigns: Game of Thrones was completed by the Australian Council on Children and the Media (ACCM) on 22 February 2019.

This review of Reigns: Game of Thrones contains the following information:

Our Reviewer played the game for several hours.

Reigns: Game of Thrones is a very basic card game of choice. It is a spin-off from the original app ‘Reigns’, which has been very popular, but uses characters and plot lines from the television series Game of Thrones. Cards are presented one at a time, depicting a character as well as a certain situation. The scenario or situation is written descriptively above the illustrated character, and children will need to have at least 6th grade reading skills to quickly and easily interpret it. The player can then select from two choices, revealed by tilting the card to either the left or right side of the screen. To choose, the player simply swipes to the preferred side. Responses have consequences and help to build up a narrative.  Further characters and scenarios are unlocked and revealed as you progress. They either fill or empty the symbols above the card – which (with lack of explanation) seem to represent things such as; Health and Defence. Each game has a set of aims, which can be viewed when selecting one of the symbols. However, one of the main objectives is to stay alive.

If you’ve never seen the television show Game of Thrones, this game would be quite confusing. The situations that are presented often don’t have clear answers and without background knowledge of the show itself, responses are very arbitrary and might prove  frustrating for some. The content within the game itself has very explicit themes including; betrayal, murder, debauchery and the occult. That would not be surprising to those familiar with the television show, but (as the show is rated as MA 15+ in Australia) one would hope that children under 15 were not so familiar.