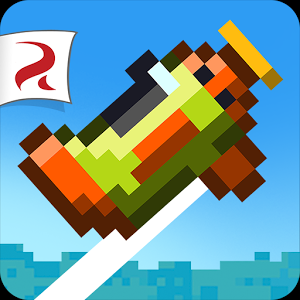 This review of Retry was completed by the Australian Council on Children and the Media (ACCM) on 21 February 2015.

This review of Retry contains the following information:

This review focuses on levels 1-8

Retry is a flight-based side-scrolling game. The objective is to play through the multiple levels of increasing difficulty, tapping the screen in order to maintain flight for the plane and reach an end checkpoint for each level. The skills required to play are spatial/visual and motor skills.

When the app is opened, a small animation of a pixilated plane appears. The game indicates that players must sign in via an email account if they wish to play. Players are then taken to a side-scroller screen where they are instructed to ‘Tap to fly!’. When a finger is pressed on the screen, the plane goes up – if a player keeps their finger on the screen, the plan will rapidly fly straight up into the air vertically. If they tap lightly in brief movements, the plane will fly more smoothly along the path. The aim is to fly the plane towards the end-of-level checkpoint.

If the plane crashes, players are brought back to the beginning of the level. Upon completing a level, players are shown their final scores in regards to the distance travelled, best time, number of crashes and points obtained. The levels become increasingly challenging to complete as players progress through the game – more obstacles are put in the way, coins are placed in harder-to-reach locations, and routes become longer.

Along the path of flight, players can do flips in their plane, collect coins (which are then used to mark retry points), etc. The app also contains a list of possible achievements to obtain – these incorporate things such as ‘Collecting 50 coins’, ‘Opening 50 checkpoints’, ‘Played over 30 hours’, etc.

At the end of each level, players can tap a button that encourages them to sign in via Facebook – the app offers to give players one coin by connecting.

When a player lands near a small tower checkpoint, there is potential for them to create a retry point (thus meaning they have less far to travel if repeating the level again). To do this, they may elect to use one coin or to watch an advertisement. If a player chooses to watch an ad, they are shown a video ad that cannot be manually closed – a full-screen ad is shown (of another gaming app such as Candy Crush Soda Saga), and must be watched the full way through.