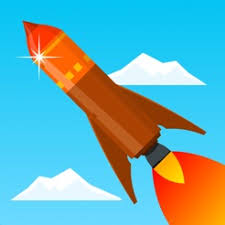 Rocket Sky! is a basic game where players hold down the screen to launch a rocket as high as possible. Basic motor skills required. Not suitable under 12 and parental guidance to 16 due to excessive advertising and in-app purchasing, not protected through any parental lock.

This review of Rocket Sky! was completed by the Australian Council on Children and the Media (ACCM) on 22 October 2019.

This review of Rocket Sky! contains the following information:

All available features were considered.

Rocket Sky! is a simple game where players aim to launch a cartoon rocket as high as possible by tapping and holding down on the screen. There are two bars on the rocket which indicate remaining fuel and the heat of the rocket. Basic motor skills are required and there are minimal written instructions so once instructed on the activity, reading skills are not required. The player is rewarded with money for each attempt, allowing for purchase of upgrades (e.g. speed and fuel). The rocket makes sounds (e.g. whoosh) which may entertain younger children. It appears to be minimal skill required to achieve success in the game, rather the rocket gains different heights at random.

Rocket Sky! may be an enjoyable game for some, however it is likely that many players will get bored easily. There are excessive advertisements within the app. For example, on the left hand side of the main screen, it appears as if there is another element to the game and the words ‘play now’ are written, however this opens a new window to purchase an app. There is also an advertisement banner on the bottom of the screen which advertises different but similar apps. Additionally, after almost every attempt, when clicking to ‘claim coins’ (which is required to play again) a video of an app advertisement appears, and the whole video must be watched to be able to exit (and sometimes even two videos must be watched before being able to exit). To exit, the player must click a small cross on the left hand side of the screen which is likely to be missed by young children. If the cross is not touched accurately, a screen will open to purchase the advertised app. Additionally, there is an option to ‘double’ or even ‘triple’ the coin reward, which again leads to a video app advertisement. There is an option to remove the advertisements on the main screen which costs $4.49 and is not behind any parental lock. Having to watch an advertisement video before being allowed another attempt is frustrating, so it is expected that children will either request the paid version so the advertisements are removed, or become uninterested in playing. An additional concerning feature is the use of push notifications. If enabled, the app will send you notifications several times daily e.g., ‘Your rocket is ready for launching! The countdown is on! 5…4…3…’. Rocket Sky! has minimal benefits and multiple concerning elements.