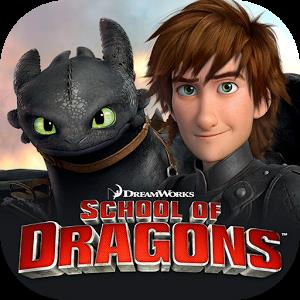 School of Dragons is an interactive dragon-riding game based on the feature film of the same name.

This review of School of Dragons was completed by the Australian Council on Children and the Media (ACCM) on 27 June 2014.

This review of School of Dragons contains the following information:

This review focuses on levels 1-8.

School of Dragons is a game that allows players to explore the world of Berk. The objective of the game is to collect in-game currency, gain experience points and ride a variety of dragons. There are some skills required when playing the game, which include visual/spatial skills and reaction time skills.

On the first screen of the app, players are told they need to sign in or register if they wish to ‘gain the ability to name your Viking and dragon, and even earn some bonus coins and gems’. Players, however, may also enter the game as a guest.

Players are told that they need to tackle many challenges to earn Dragon Trainer Points: quests, farming, fishing, thunder run racing, fight club, fireball frenzy, achievements and leveling, etc.  They are then given the option of entering a Viking name, as well as visually constructing their Viking character (being able to select from a range of eyes, hair styles, skin tones and war paint).

If characters have an exclamation mark hovering over their head, players must tap on it in order to speak to them. Players are then given a quest – for example, ‘Talk to Hiccup’. When quests are completed, players are offered rewards in the form of gold, experience, and items. It is possible to move a player’s Viking character by touching the screen or using the arrow buttons on a tablet keyboard. When moving through the world of Berk, an arrow at the bottom of the screen points players in the right direction and tells them where they need to move.

Within the app, players also have the option of watching video clips from the feature film How To Train Your Dragon. Within the interactive game play itself, some of the quests involve players being able to ride as the dragons from the film – these include Toothless, Thunderdrum, The Whispering Death, etc. The game contains a multiplayer component which enables them to play and compete against other individuals from around the world.

It is possible to earn free gems by inviting friends to play the game via Facebook. Players may also compete against other individuals (either friends or players from around the globe) in a multiplayer component.

No game playing behaviours of concern to parents were found during the review.