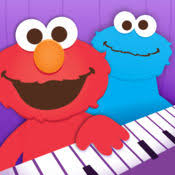 This app offers children the opportunity to explore a variety of musical instruments (and the sounds they make) while either playing along with the Sesame St Band or tapping the screen to hear the sound each musical instrument makes. Suitable for 4+ years.

This review of Sesame Street Makes Music was completed by the Australian Council on Children and the Media (ACCM) on 10 August 2017.

All levels of the game were played.

This educational app uses well known children’s songs such as ‘Twinkle, Twinkle Little Star’ and ‘The Wheels on the Bus Go Round and Round’ to introduce the player to a variety of musical instruments and genres. The player can play along with the Sesame St Band on an instrument (ie drum, xylophone etc.). To do this the player must tap on the screen to make the instrument play, and tap on each member of the band to stop or start them playing. The second option is to play on your own in which case the player is taken to a screen where they can tap on a variety of musical instruments to hear the sounds they make.

This simple educational app introduces the player to a variety of musical instruments. There are clear audio instructions which very young children could follow alone, however, it would be more beneficial if in the first instance a parent played the game with their child so that they can discuss musical concepts such as the beat and pitch, talk about the different instrumental sounds and encourage their child to sing along with the songs.

There is an icon that says ‘more apps from Sesame St’, but when the reviewer pressed it there were no apps available.