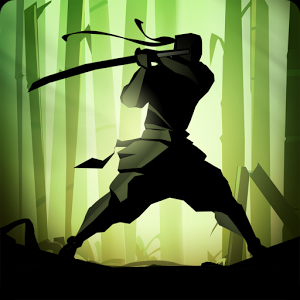 This review of Shadow Fight 2 was completed by the Australian Council on Children and the Media (ACCM) on 23 February 2015.

This review of Shadow Fight 2 contains the following information:

This app was played for approximately 2 hours.

Shadow Fight 2 is a combat/fighting RPG game where players progress through levels of increasingly difficult fights. The objective is to consistently upgrade armour and weapons to meet the new challenges present with each level, and to battle a range of demons. The skills required to play are spatial/visual, motor skills and lateral thinking.

When the app opens, it asks players to sign in via an email account in order to play. There is then a brief animation involving sword-fighting, where a character describes his quest to find the Gates of Shadows having been an invincible warrior in the past. He fights demons, but describes them as ‘draining my soul, tearing my flesh, turning me to a shadow’. The character then goes on to describe how ‘For an eternity, I am now doomed to fight the demons I freed’.

The app itself then presents a small text box to players, with text from a ‘Sensei’ stating ‘My vain disciple has returned and without a body it seems. How unfortunate for you. You’re nothing more than a shadow now. And yet, I sense great power within you. Let’s see you move!’ After this, players are taken to a side perspective of an Asian-style training room. There is a punching bag in the middle, and players are not given instructions on how to use their character. However, there is a round dial on the left-hand side of the screen that contains eight small arrows placed around the circle. If players tap these arrows, they can direct their character to move in certain ways. For instance, the up arrow causes the character to jump; the down arrow makes him squat, whilst the upper and lower side options cause him to jump in a left or right direction. There are also buttons that enable players to make him punch or kick.

Players then have the opportunity to fight a live opponent, and must combine movement with attacks in order to win and slowly decrease the health of the other player. The battle has two rounds, and once these are complete, players are presented with a ‘You win!’ screen – this informs players of how many moves they utilised (e.g. perfect, first strike, max combo, shock, hard style) and thus how many points they have earned.

Players are then informed by their Sensei that they need to select a weapon to use. After equipping a weapon by buying it with the points/coins earned from the last battle, players are informed that they cannot die in this state. They are then instructed to go to their map and choose a demon to fight. Players are also introduced to May, a female weapons expert who asks to work with players. She also tells players that they may earn money in tournaments, and that with each stage, opponents become stronger while the prizes increase also. Players are additionally able to view their various combination attacks by visiting their profile – combo attacks involve pushing one of the direction arrows, followed by the punch or kick option.

As players progress through the tournament, their armour and weapons become too weak to battle the opponents. As a result, they must use coins or gems to upgrade to better gear. The app also contains a survival mode, where players can fight opponents for coins. Also in this area, players must fight as many opponents as possible before they lose all of their health. If players run out of energy to fight, they may either wait for it to restore naturally over time, or use orange gems to immediately restore it and continue playing.

It is possible to obtain free gems or refill their energy meter by watching advertisements or downloading/installing other apps. Different tasks earn players different numbers of gems, and once an advertisement has begun playing, it becomes a full-screen ad that must finish playing before it can be closed. The material within these ads contains gambling content (in apps such as Watch Slot Galaxy and Big Fish Casino Free), as well as product placement (in ads that say to ‘Get the skin cream celebs are raving about’, for 285 in-game gems) and violent themes (such as the gaming app Chains of Darkness, or Clash of Kings).

The women are written as intelligent and strong characters, but are physically presented as stereotypically attractive – they have large breasts, are very thin and athletically built, with long feminine hair.

This is a role playing game which requires the player to use and master different fighting techniques and skills to inflict damage on their opponent’s health. This game contains animated violence.