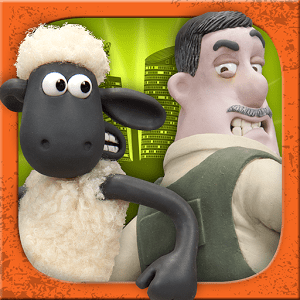 Shaun the Sheep: Shear Speed is a side scroller racing game.

This review of Shaun the Sheep: Shear Speed was completed by the Australian Council on Children and the Media (ACCM) on 27 July 2016.

This review of Shaun the Sheep: Shear Speed contains the following information:

Shaun The Sheep: Shear Speed is a racing app based on the children's film franchise of the same name. The objective is to travel as far as possible by swiping in various directions in order to collect items and avoid obstacles. The skills required to play the app include quick reflexes, as well as motor skills to utilise the central functions of the app.

When the app is first opened, players are taken to a home screen containing a logo stating ‘Shaun the Sheep Movie, presents Shear Speed’. There is a Play icon in the centre of the screen, a question mark icon in the top right-hand corner (which allows players to view the Shaun The Sheep movie trailer and visit the official website), as well as a Facebook icon. The Facebook icon allows players to immediately ‘share’ something on their wall regarding Shaun the Sheep, but players must answer a maths equation (e.g. 47+40=___) in order to access this.

When gameplay begins, players are shown a brief tutorial – they are presented with a side-scroller where there are several sheep characters running down a street. They are instructed to ‘Tap to jump over small obstacles’ and to ‘Swipe to jump over large obstacles’. When they come across obstacles they must ‘roll under’; players are told to ‘swipe down’. As they progress along the path, the sheep are able to eat small pieces of grass which fill up a player’s ‘boost bar’. Once this is completely full, players can ‘swipe forward to activate’, thus giving them additional running speed and the ability to run through obstacles. The game also displays small road signs which have arrows pointing up, down or forward, and players must swipe the screen in this exact sequence or they will lose one of their sheep.

If players run into obstacles or fail to repeat a sequence correctly, one of their team of four sheep will be removed from the race as they are electrocuted by an animal containment officer following just behind in a vehicle. If all sheep are hit by obstacles and taken by animal containment, the level ends and players are shown a screen stating how far they were able to run. Players also have the option of sharing this score/time with friends on social media websites such as Facebook and Twitter.

When sheep are captured by animal containment, they appear to be electrocuted and ‘zapped’ out of the race – although animated, this is presented in quite a graphic manner, with the sheep seen to buzz up into the air and then disappear. However, there does not appear to be any significant inappropriate content for younger users, with no in-app purchasing or advertisements being present.

No: no in app purchasing found during this review.

There is a Facebook icon on the home page which allows players to immediately ‘share’ something on their wall regarding Shaun the Sheep, but players must answer a maths equation (e.g. 47+40=___) in order to access this. Players also have the option of sharing their individual score/time for each run-through with friends on social media websites such as Facebook and Twitter.

No game playing behaviour which may be of concern to parents was found during this review. However when sheep are captured by animal containment, they appear to be electrocuted and 'zapped' out of the race. Although animated, it is presented in a graphic manner, with the sheep seen to buzz up into the air and disappear.