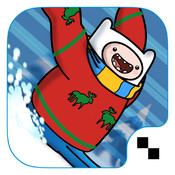 This review of Ski Safari: Adventure Time was completed by the Australian Council on Children and the Media (ACCM) on 27 March 2014.

This is a race style game in which the player slides down a snowy mountain slope to escape an avalanche. The player must dodge obstacles, collecting coins and other objects on the way.

Players start as the default character Finn. The game includes a brief tutorial that shows the user how to control the movements of Finn in order to escape an avalanche. In fleeing the avalanche, the player must avoid obstacles, collecting coins and other items along the way. The idea of the game is to survive as long as possible before being caught by the avalanche. After capture, the user can start the game again or use a gem to continue.

Coins can be used to buy upgrades and variations to the game. The user can purchase extra coins, gems  and other items. Players can complete missions to earn extra rewards and increase their rank.

Yes: Coins, gems and a coin doubler, can be bought for $0.99 to $13.99.  In-app purchasing may be disabled by adjusting the device settings.

Players can log in to see friends’ scores.  The settings option contains a leader board and achievements section.

A Mystery Chest can be purchased with coins – the contents are unknown and may be common or very rare.

Adverts appear for other apps. In the Settings option, players can purchase other games by the same developer.

No coarse language was found, but the character frequently uses terms such as “flipping yeah!”, “this is flipping crazy” and “whatever”. Some parents might be concerned that their child could pick up such terminology.

Players can crash into objects, or slide off cliffs, without any consequence.