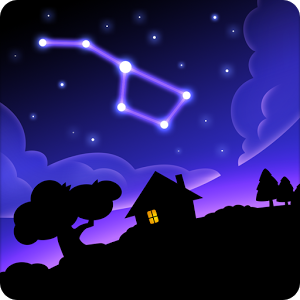 This review of SkyView Free was completed by the Australian Council on Children and the Media (ACCM) on 29 May 2016.

This review of SkyView Free contains the following information:

The features of this app were reviewed to completion.

SkyView Free is a star-gazing app intended for educational purposes. The objective is to move the device around in order to view various areas of the night sky and explore stars, constellations, galaxies, and planets. The skills required  involve motor skills and an understanding of astronomy would be beneficial.

When the app is first installed and opened, players are shown a welcome screen stating that the app allows them to ‘Find stars, constellations, planets, satellites, and more simply by pointing this device at objects in the sky’. It goes on to state that ‘SkyView uses your location to accurately identify objects in the sky’, and asks that players choose ‘Select Location Automatically’ for the best results. The initial screen also informs players that it is possible to use their device camera to take pictures with SkyView and store them on the device.

With a background of a starry night sky, players are required to move their device left, right, up or down in order to scan the map of the sky in three-dimensional space. There are small icons that signify planets, and when players use the mouse to hover over them, they are informed of the name of the object. This is also the case for individual stars, and larger constellations. The images of constellations are outlined so that users can view their proper shape. For example, stars such as ‘Spica’ and ‘Syrma’ are shown within the constellation of ‘Virgo’. If a player taps on one of the stars, they are shown a brief description of the star (e.g. ‘Kraz, star in Corvus. Kraz is the 2nd brightest object in the constellation Corvus’). By moving their device, players are also able to travel along the path of movement that the individual star will take – players are presented with a dot as the hypothetically moving star, and are shown time stamps indicating exactly where the star will be at a given time.

The app contains a small Search icon in the top right-hand corner of the screen – this opens a drop-down menu with options to search for the following categories of objects: Solar System, Star, Constellation, Brightest Satellites, Nebulae & Galaxies, and Messier Objects. Within each of these categories, players are able to browse through the range of items that they can search for individually (e.g. within Stars, they have options such as ‘1 Gem, Star in Gemini’, ‘11 Hya, Star in Hydra’, and ‘Achernar, Star in Eridanus’).

There is another menu icon in the top left-hand corner of the screen – this brings up options on top of the regular sky-view screen. In the centre, there is an icon which allows players to take a photograph of whatever their screen is displaying at the time. This can then be shared with friends via social media websites such as Facebook, Twitter, or email. It is possible to do this with video footage also.

Players additionally have options to increase or decrease the size of planets and stars, to make the icons more visible. The app also contains the option to choose a specific date and time, so that players may calculate object positions

The app does not appear to contain any advertising, and there are no in-app purchases. The app serves an educational purpose, allowing users to explore aspects of the night sky and learn more about astronomy.

Players are able to take a photograph of whatever their screen is displaying at the time. This can then be shared with friends via social media websites such as Facebook, Twitter, or email. It is possible to do this with video footage also.

No game playing behaviour which may be of concern to parents was found during this review. This app allows users to explore aspects of the night sky and astronomy.