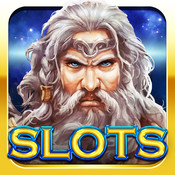 This is a game of chance – a simulated gambling slot machine.

This review of Slots - Titans Way was completed by the Australian Council on Children and the Media (ACCM) on 11 March 2014.

This review of Slots - Titans Way contains the following information:

This is a game of chance – a simulated gambling slot machine.

This is a mythical hero themed slot machine game, with different areas to move through such as the Valley, Enchanted World and Mount Olympus. In some areas, there may be one or two games which can be downloaded, the rest must be unlocked as the player moves up levels or by spending gems. Players start with an allocation of coins which are used to place bets on each spin. They are also allocated some gems. A Pay Table can be accessed which outlines the winning combinations. Wins are collected in the form of coins. Stars are awarded for each spin – accumulating stars takes the player to higher levels. The higher the bet, the more stars are awarded. This slot game plays multiple lines per spin, which cannot be altered. The amount bet per spin can be adjusted up or down. As the player moves up levels they receive bonus coins and the maximum bet amount is increased. Additional games are unlocked at higher levels. A “win” frequently occurs, accompanied by congratulatory messages and sounds. Often the win is in fact less than the amount which has been bet. The frequency of rewarding messages and sounds is high. Bonus free coins are awarded every hour, by spinning the Special Bonus slot. Players also receive one free daily spin on a wheel of fortune, on which the prizes are coins or gems. Extra spins can be bought with gems.

In some games, when a player wins coins on a spin, a red and black symbol appears. If the player taps on this symbol, they are taken to an extra game in which they can wager the amount of the last win, by choosing either Red or Black in a double-or-nothing bet. The game flips a card on the screen, which will be either red or black. If it is not what the player selected, their last win is not added to their win and they return to the slot game. If the player has chosen correctly, their win is doubled and they may either take their winnings and return to the slot game or risk it for the chance to double it again. Players can gamble up to five times.

Gems can be used to purchase boosts, which multiply players’ winnings. Gems are occasionally won and can also be purchased with real money

Players can purchase coins and gems for USD$1.99 to 99.99. Special deals may be offered.

Players can invite friends on Facebook or email to earn extra coins. When a player logs into Facebook, the app receives the player’s public profile and friend list. Players can also link to the Game Centre to view achievements.

This is a simulated gambling game. See Reviewer’s Comments for more detail.

Ads are presented for other slots games.

Some of the mythical female characters and goddesses are scantily clad. Many of the male gods are heavily muscled.

This is a simulated gambling game. See Reviewer’s Comments for more detail.

Violence and scary material: Some of the mythical characters at the higher levels are slightly demonic in appearance with glowing eyes. There is a ghoulish, curvaceous, skeleton.