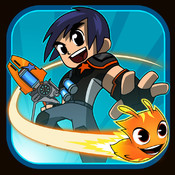 This review of Slugterra: Slug it Out! was completed by the Australian Council on Children and the Media (ACCM) on 7 May 2014.

This review of Slugterra: Slug it Out! contains the following information:

Slugterra: Slug it Out is a match-the-tile puzzle game based on the television series Slugterra. The player powers their slugs by quickly matching tiles. Once their slugs have reached full power, the player fires them through a blaster to defeat evil villains.

The player begins ‘Slug it Out’ as the character Eli Shane who is an underdog in the world of slug-slinging. The main mode of this game is the story mode which has seven different levels and begins with a training level. There are three different modes in the game; they are story mode, challenge mode and multiplayer mode (for more information on multiplayer mode see the Online Information section). In challenge mode the player is tested to see how many opponents they can defeat in a minute and thirty seconds.

This game can help children develop their memory skills and strategic abilities. It can also help develop multi-tasking skills as the player must focus on the tile matching game as well as the opponent’s game, to try and pre-empt their moves.

The game connects to OpenFeint if you are playing on an Android or Game Centre if you are playing on an Apple device.  These platforms are online communities where you can share your scores and connect to your Facebook page. However, you can choose to restrict OpenFeint or Game Centre on your device.  In the multiplayer mode of this game these online communities also allow you to play against friends or be auto matched against another player who is online.

There is some product placement and advertisements in this app for the television show ‘Slugterra’.

There are elements of the character, Eli Shane, taking revenge on the bad guys. This may influence revenge seeking behaviours in children.

Violence and Scary Material: The aim of the game is for the player to shoot slugs out of a blaster at an opponent, in order to defeat that opponent. Because of this the game has some elements of violence, however it is not graphic. In story mode, the opponents often threaten the player with one-liner, such as “I am your worst nightmare”. When the player is defeated the screen turns red and begins to shake. These aspects of the game may be scary to some children. Some of the powers which the slugs produce can be violent, for example, releasing noxious gasses which momentarily debilitate the opponent.

Warning advertising content of in app ads may not be appropriate for young players. We’ve had feedback from a concerned parent that an in game ad for Criminal Case was shown for several seconds which shows graphic details of a dead man in a bloodied bath with a blood covered saw. This ad could not be skipped.