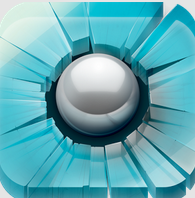 This review of Smash Hit was completed by the Australian Council on Children and the Media (ACCM) on 2 April 2014.

This review of Smash Hit contains the following information:

This is a three-dimensional on-rails game in which the player throws metal balls to break objects that would impede their free passage through levels. The game objective is to advance as far as possible through the levels before the player runs out of balls. This game requires spatial awareness skills.

Smash Hit is an on-rails ball-throwing game. It has 10 levels which increase in difficulty, and the player must start from the beginning every time (after quitting the app, or losing within the game) unless the ‘Premium version’ is purchased. In the top right-hand corner of the menu screen, there is a place where the player can purchase the premium edition of the game for $2.25. The music in the app is quiet and ambient. The player's high score is stored locally in a small area in the bottom left-hand side of the menu screen, drawing the player’s attention to bettering their own score for personal satisfaction, as opposed to achieving in-game success.

Players can purchase the premium edition of this game for $2.25 – there is no other in-game purchasing.

No game playing behaviour that may be of concern to parents was found.