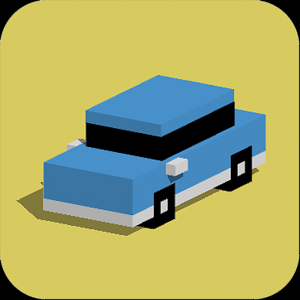 This review of Smashy Road was completed by the Australian Council on Children and the Media (ACCM) on 8 December 2015.

This review of Smashy Road contains the following information:

Smashy Road is a swipe-based driving game. The objective of the app is to keep a player’s car on the road for as long as possible, swiping left and right to avoid other cars and to collect tokens along the way. The skills required to use the app are predominantly motor skills and good timing/reflexes.

When the app is opened and installed, players are thrown straight into gameplay. They are shown a simply-designed road, and are told to swipe upwards on the screen in order to accelerate. There are two lanes, and once players begin to automatically move forward, they must swipe left or right in order to avoid hitting other cars on the road. This requires quick reflexes, and can be challenging when cars are spaced very closely together.

Along the way, players can run over items to collect them. These items are S coins, which enable players to win a new car once they have enough of them. Players can also view video advertisements in order to earn these coins. During gameplay, players can slow down their car by dragging backwards with a finger on the screen, as opposed to swiping forwards in order to accelerate.

The player’s car is also being chased by a police vehicle – if they slow down too much, the police car will catch up to them and their round will be over. If players crash into other cars along the street, the level also ends and players must start from the beginning again.

The app contains mild violence – this is present when a player’s car crashes into either police vehicles or other cars within the game. A brief animated collision is shown, occasionally with sparks and fire emanating from the vehicles.

Although Google Play Store listed this app as containing in-app purchases, none were seen during the review of this app. All features of the app were explored.

Players can sign into Google+ to see whether any of the people in their circles have also played Smashy Road. Additionally, players can ‘Tell others about this game and compare scores when they play’ by sharing a link via social media websites (such as Facebook, Twitter, etc).

If players tap on the ‘Win a new car’ icon, they are taken to a spinning wheel – they must drop in a certain number of coins by tapping a button (e.g. 200 S coins), and the wheel then spins and offers players a random car – the spinning wheel is reminiscent of a gambling game, and there are small ping noises when a car is won that also simulates gambling.

At the end of each game, players are given the option to watch an advertisement to earn extra coins. One video ad earns players 50 coins. These ads are full-screen, and cannot be manually closed until they are finished playing through. They advertise other gaming apps such as Boom Beach (animated violence), Clash of Clans (animated violence), etc. There are also occasional static image advertisements presented between gameplay sessions – these are full-screen and must be manually closed. Apps advertised include simulated gambling apps, such as Double Down. The ad for this states ‘Hit the pokie jackpot while crossing the Sydney Harbour Bridge’.

Racing away from police and the gambling content may be of concern to some parents.