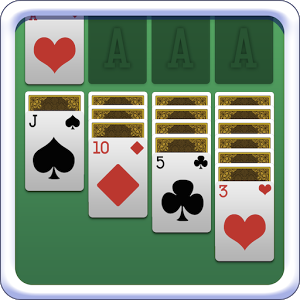 This is a card game simulator app, which involves the game solitaire

This review of Solitaire was completed by the Australian Council on Children and the Media (ACCM) on 9 July 2015.

This review of Solitaire contains the following information:

This game was played for approximately 1 hour.

This is a Casino-style game involving the card game of Solitaire. The objective of the game is to earn higher scores by playing multiple games of Solitaire. There are limited skills needed, as it is largely chance-based – however, knowledge of how to play solitaire is necessary.

When the app is opened, players are taken to a page that contains a Solitaire game board. It presents a stack of cards, four empty slots for the aces to be placed at the top, as well as rows where cards can be placed down below. Players must tap on the face-down deck of cards to present three additional cards. To win the game, players must get all of the cards onto the seven Foundation piles. Each Foundation has one card at the top, and players must put the cards from the pile onto them in the order of: Ace 2 3 4 5 6 7 8 9 10 Jack Queen King. Aces will sit up the top, while other cards will sit beneath the face-up cards – e.g. a card that is a 9 will only take an 8 beneath it. When players run out of flips for their deck of cards, they can tap on an icon to restart the game.

Players can click on a Hint button to receive hints as to what options they have for their current cards. The game also has a Settings panel, which contains options to turn on or off: Draw 3, a Timer Mode, Vegas Scoring, Tap to Move, or Left Handed Play. The game also contains a Help section, which explains the rules of the game. It describes that Solitaire is a game played with 52 cards, where 28 cards are initially placed in the 7 piles of the tableau area and only the top card is visible. The objective is to create four piles of cards, one per suit, in ascending order (beginning with the Ace and ending with the King). With Vegas Scoring, players will have $52 at the beginning of the game – they can win $5 each time they move a card to the foundation area.

There is limited learning potential as the game is very simplistic and largely chance-driven.

No in-app purchases during the review.

No online information during this review.

This is a card game-based gambling app.

Playing card games, based largely on chance, to win in-game cash may be of concern to some parents.