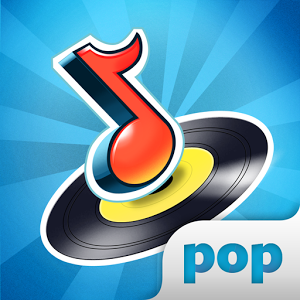 This is a musical challenge social game. Caution: In app purchases, interactivity, advertising and coarse language

This review of SongPop was completed by the Australian Council on Children and the Media (ACCM) on 27 February 2014.

This review of SongPop contains the following information:

This is a musical challenge social game.

In this game the player must guess the song or artist being played faster than their opponent.

There are many different playlists of songs covering different periods and styles of music. A number of playlists are included for free - more can be unlocked or purchased with game coins. Players collect coins by playing challenges – if they win by guessing the correct song or artist faster than their opponent, they receive more coins. Powerups, which help with challenges, can be bought with game coins. The player is presented with an opponent and a few playlists to choose from. A game consists of five songs, for which the player must select the correct title or artist from a choice of four. The winner is the player with the most points, determined by the number of songs guessed correctly and the speed in which they guessed. The two players take turns in choosing a playlist from those presented.

The game will make suggestions of other players who have similar playlists' profiles. The player can challenge them to play. If the opposing player is not currently online, the game will record the player’s score. The next time the player rejoins the game the results will be shown.

Players have the option to chat with other players and to watch videos of songs on YouTube.

Players can purchase coins for $1.99 to $25.99. Players can sign up as a VIP, to receive benefits like unlimited chat, for $2.44 for a week to $45.10 for a year. Purchasing in Facebook games can be by debit card, credit card, Paypal and Facebook gift card. There is also the option to charge smaller purchases to a mobile phone account, however the purchase price is higher using this method as a significant fee is added. The mobile phone purchase transaction screen states “Customers under age 18 must have account holder's permission”. A text message is sent to the mobile number entered to confirm payment.  Parents should be aware that if they enter credit card details, the player can make more than one purchase. On making a credit card purchase, players are advised that “Facebook will save your payment information for future purchases. You can always remove or manage this information in your account settings.”

Players are invited to connect to Facebook and share achievements with friends or challenge them to play.  The player’s first name and surname initial and their profile photo are potentially able to be seen by any other players, not just Facebook friends. Players can click on another player’s photo to view their profile, which includes their home city and country and the option to chat with them. Players can change their profile photo in Settings. After having played for a couple of days, the reviewer received an email from the game showing the name and profile photo of a player with similar music tastes.

Ads are presented for other games by the same developer. Parents should be aware that games played in Facebook may have a panel at one side of the screen which has several sponsored links, effectively ads. These could be for products (e.g. posters) and other games (which may include war games). When players watch music videos in YouTube, there is often an ad before the video begins.

One of the ads which appeared at the side of the screen was for a “Sexy MMORPG” (Massively Multiplayer Online Role Playing Game). It contained a cartoon style drawing of a voluptuous woman in a skimpy outfit. It is possible to watch video clips of songs on YouTube which may include sexualised images and gender stereotypes.

Violence and scary material:
None found in the game, however ads may be displayed which include war games with images, which may be violent. It is possible to watch video clips of songs on YouTube which may include violence.

Use of substances:
None found in the game. It is possible to watch video clips of songs on YouTube which may include images of substance use.