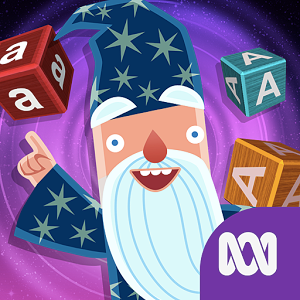 This review of Spell Block Academy was completed by the Australian Council on Children and the Media (ACCM) on 3 July 2015.

This review of Spell Block Academy contains the following information:

Spell Block Academy is a spatial-movement puzzle game. The objective of the game is to move letters across a board in order to correctly spell words. Letters can be moved in any direction and the game contains obstacles and rewards as players progress through the game. The skills required include motor skills, spatial awareness, strategic thinking and spelling.

When the app is opened, players are welcomed as an Apprentice Wizard and asked to select a name for themselves. They are then met by an old male wizard who tells them that in order to become a great wizard, players must master the Words of Power. They are told to press the Play button to enter the Astral Vortex and begin their training. From here, they are taken to an overhead view of a board. Players are told that for each word that they spell correctly, they will be able to go deeper into the Astral Vortex. To play, individuals must swipe in the direction that they want to move a block – blocks can be moved into empty holes to complete full words. For example, the board contains the word ‘Welcome’ with the ‘c’ missing – the ‘c’ is positioned elsewhere on the board and it must be dragged into its correct position before the timer runs out.

As the game progresses, players have two blocks randomly positioned and two words they must complete within the allocated time frame. In instances such as this, the blocks are linked and they will both move in the same direction when one of them is moved. Players are provided with a Word Banner at the top of the screen, so they will know which words they must complete. There are also coins that are scattered across the board that players may collect, as well as obstacles that blocks cannot pass through. Blocks can also fall off the board and cause players to lose a life. If a player places the incorrect letter in its allocated hole, they will also lose a life. In later levels, additional obstacles are incorporated – for example, a ‘living skull’ that moves around the board can ‘eat’ the letter blocks if it comes into direct contact with one. The board designs become increasingly complex, with more places to fall off, more obstacles and more skulls.

Once this level is complete, players receive a congratulatory pop-up and are told that they may now practise their spell craft in the Five Realms of Elemental Magic (Air, Earth, Water, Fire and Magic). Players receive experience points as they complete levels, and must obtain a set amount of experience before moving onto the next rank.

It is possible to ‘bling out the wizarding chambers’ by purchasing things from the store within the game. Players can use the coins they collected during gameplay to purchase items such as candles (10 coins), wands (100 coins), decorative items such as skulls (175 coins) or trumpets (600 coins), etc.

No in app purchasing.