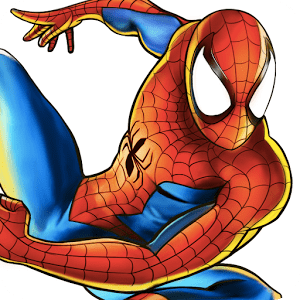 This review of Spiderman Unlimited was completed by the Australian Council on Children and the Media (ACCM) on 30 September 2014.

This review of Spiderman Unlimited contains the following information:

This game was played to level 10.

Spiderman Unlimited is an action arcade game that utilises a forward-scroller style. The objective of the game is to play through the storyline and track down the Sinister Six, a group planning to destroy Earth. Players swipe right, left, up and down through various courses as they direct their character, collecting items such as vials as they go and additionally killing enemies in their way. The skills required to play are motor skills, reaction time skills and visual/spatial skills.

When the app is first installed and opened, players are taken to a home screen with a background image of an animated Spiderman and are given the instruction to ‘Tap to Start’.  An animated video then begins which shows Spiderman chasing an evil villain. The game then begins, and players are shown a screen where they play in a 3rd person viewpoint as Spiderman, running across building rooftops and avoiding obstacles as they go. They are told to swipe the screen to change lanes (of which there are three), and to swipe in order to move to the left or right. Players may also swipe up to jump over obstacles or across buildings, or swipe down to slide. They are encouraged to collect small, gold, health bottles known as ‘vials’ as they go. Players may also swipe up or down in order to attack enemies. Additionally, there is a feature to tap and hold to swing, or repeat the action to continue swinging. They may also collect power-ups to boost their speed. It is possible to lose a life if Spiderman runs into one of the obstacles – however, players may revive their character by using one of their extra lives. During each level, music is played in the background in order to add to the excitement and sense of adventure.

Short video animations are also included in the game, to offer information and provide a foundation for the plot. Nick Fury appears and explains to Spiderman that the green goblin, the central villain, is from a dimension where the Sinister Six are in control, and they are on Earth to harvest a rare isotope. They have opened a portal in the atmosphere, and the rift is being held open by one of the Six. Spiderman is thus given the challenge of taking each member out one by one.

After the video animation, a ‘Parent Info’ screen pops up. It states ‘Dear parents, thanks for your attention! You can download and play the Spiderman Unlimited app for free. However, please be informed that this app also allows you to play using virtual currency (called ‘ISO-8’ and ‘Vials’) which can be acquired by playing’.

Once players click to close this, they are brought to a central home page that is broken down and divided into segments like a comic book. Players are shown that ‘Issue 1: Night of the Goblin’ needs to be completed. Within this issue are multiple quests – before each quest, players are informed of the number of experience points and rewards they will gain upon successful completion, as well as the level required for their character before they may begin it.

There is also a mode known as Unlimited Mode, where players may play through collecting vials, avoiding obstacles and killing enemies for as long as they feasibly can. In this mode, they are encouraged to connect via Facebook to share their high scores and compete on a leaderboard with friends, other daily players, and individuals around the world.

Via the menu screen, players may also participate in Events, as well as view their Team and Recruit new members. The number of lives a player has is seen within a menu bar along the top of the screen – they begin with 5 lives. Along this menu bar, players also may view the number of vials and ISO-8 they have, as well as being given the option to explore multiple Gameloft Connect options (such as links to Gameloft News, the Forum, Customer Page and More Free Games). They may also view the pages for their Inbox, Social connection, Goals, and the App Shop. After some time playing, the game states that there is extra content to download: ‘Extra! Extra! A new Issue is available! Get it now!’.

There is some violence within the app that may potentially pose a risk to children. Nick Fury encourages Spiderman to ‘punch out as many of the Green Goblin’s soldiers as possible in order to defeat them and save the planet. Cars are seen to explode and fly up into the air in some scenes, but no individuals are seen to be hurt. Some of the photographic animations have violence depicted, with characters hitting or kicking each other, and large text in the background stating things such as ‘Kapow!’. While there is some animated violence shown, due to the speed of the videos and gameplay, it doesn't pose a significant risk to children.

There is a mode known as Unlimited Mode, where players may play through collecting vials, avoiding obstacles and killing enemies for as long as they feasibly can. In this mode, they are encouraged to connect via Facebook to share their high scores and compete on a leaderboard with friends, other daily players and individuals around the world.

The male characters are presented as large, muscular men. They are dressed in form-fitting clothing that show off their muscular stomach and arms.

No game playing behaviour that may be of concern to parents was identified during the review.