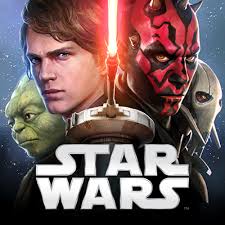 Star Wars Force Arena is a card style strategy game where players compete against each other on a battle field. Strategic skills and multitasking required to play. Not suitable for children under 9 years, parental guidance for children aged 9 – 12 due to mild violence and in-app purchasing.

This review of Star Wars™: Force Arena was completed by the Australian Council on Children and the Media (ACCM) on 14 December 2017.

This app utilizes most of the Star Wars characters throughout the series – both from the light and dark side. Players choose a side and then a range of cards to be used during battle. Cards consist of military, starships/tanks and popular characters from the movies. Each game begins with a main leader on the field (for example – Luke Skywalker), then cards can be selected or dragged onto the field –which brings to life the feature of that card (e.g., a group of soldiers). Players control the main leader’s movements, whilst soldiers and tanks automatically follow your lead and/or the objective – which is to take out the enemy’s 4 main turrets before they destroy yours. If turrets still remain after the 3 minute countdown – the player with the most turrets wins. Crystals and credits are earned during game play, and can be used to purchase upgrades, boosts and more cards. Successful battles in the Arena also advance the player’s tier level. As tier levels go up – game play becomes harder as you are matched with other players within the same tier.

Parents need to be aware of the possibility of in-app purchasing. Difficulty in gameplay increases quite substantially from tier 2 to tier 3 – co-incidentally, a main part of the game is completely locked out (Arcade Mode) until the players reach tier 4. Hence, some children may not have the patience or skill to reach tier 4 within (what they perceive to be) a reasonable time frame – and may opt to “pay to play/win” (as per what gamers have experienced recently with the new Battlefront 2 game). There is also quite a long wait to receive new card packs – which can be unlocked if you spend your crystals. To open a Tier 1 Silver Pack of cards, the current reviewer had the choice of waiting 6 hours or spending 82 crystals. Therefore, in-app purchases could add up quite a bit over time.

Both male and females are represented equally.

Some children may be inclined to use in-app purchasing to unlock certain features.

As the app includes scenes from all of the Star Wars movies as well as new fighting and scary scenes, there are several opportunities for players to be exposed to violence and scary material.