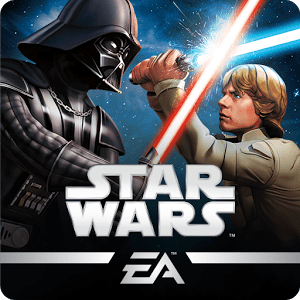 This review of Star Wars: Galaxy of Heroes was completed by the Australian Council on Children and the Media (ACCM) on 12 December 2015.

This review of Star Wars: Galaxy of Heroes contains the following information:

This app was reviewed to level 7

Star Wars: Galaxy of Heroes is an action RPG gaming app. The objective of the app is to collect as many cards/heroes as possible, in order to use these in battles against enemies. Players are encouraged to buy more heroes with the in-game items they earn as a result of winning battles, to level-up their heroes to make them more powerful, etc. The skills required to use the app are predominantly motor skills and strategy/problem solving.

When the app opens, players are introduced to the game by a female character named Cantina Keeper. As she briefly describes the situation to players, another character is presented – he is named Hutt and is apparently the ‘top player’ in the area. Cantina suggests that players could potentially ‘take him down a peg’ one day. Hutt is a large monster-like creature, with a pale appearance and a large blob-like shape. Cantina then goes on to state that ‘this is a game where you collect heroes and villains from across the galaxy. You lead them into battle, upgrade them, and fight your way to the top.’ Players are offered two free character cards to start their journey: a jedi with the heal ability, and a clone trooper with the ability to target all enemies. The game then suggests that players ‘take them into battle’.

Within the app, battle is presented as a turn-based combat – the heroes are viewed as 3D characters in battle sequences and these heroes face off against numerous enemies. There are health bars above the heads of both players' characters, as well as the in-game opponents. Players then can tap on icons in the bottom right-hand corner of the screen in order to complete basic attacks or special abilities (e.g. healing). Opponent characters are seen to die and disappear – there is a small explosion when they die and players are presented with the word ‘Victory’ when they win and no more enemies are left alive. No blood appears to be shown, but the number of health points that are detracted with each strike are shown in red text.

At the end of a battle, players receive rewards in the form of purple crystals, experience points, shards, credits as well as other items. Crystals can be used to purchase more hero 'data cards’. When players purchase new hero cards, they are presented with a new character – these characters have differing attacks and abilities, different power levels and degrees of experience, etc.

Players can locate new challenges and battles within the Daily Activities section of the app. This presents activities in the form of quests, such as ‘The Path of the Light Side: Complete 2 Light Side Battles’ – players are offered rewards for completing these quests. When players have multiple hero cards, they can set up their squad at the beginning of battles by choosing which heroes they wish to utilise.

Battling opponents also uses up energy shards. In more advanced battles, players have to utilise strategy-based skills – for instance, boss battles sometimes involve smaller droids which have the capacity to heal a larger boss droid. In these cases, players must tap on the smaller droid to target it first, and destroy it before destroying the boss. It is also possible to ‘train’ characters in order to level them up, and make them more powerful in battle.

Players are asked if they would like to play as a guest, or to sign into Google Play and subsequently ‘gain access to Google Play Achievements’. There is also a message inbox within the game, where players can receive information and updates – this inbox also contains a link to the web forums run by the game developers, which is external to the app itself.