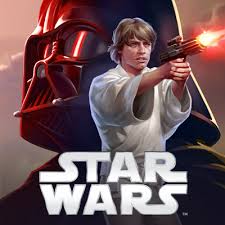 This app is a first person shooter game involving characters from the Star Wars series. Players will need quick reaction time and fine motor skills to play. Not suitable for children under 13 due to social media connectivity and violent themes.

This review of Star Wars: Rivals was completed by the Australian Council on Children and the Media (ACCM) on 11 December 2017.

This review of Star Wars: Rivals contains the following information:

In Star Wars Rivals, players can use their favourite characters to battle against the imperial empire in gun battles. Players can either verse the computer in “Campaigns” or against other players in the “Arena”. Gameplay involves moving the target by swiping in all directions to the left of screen. Ducking, firing and gun type toggle are all “one touch” activated to the right of screen. Left and right movements to singular vantage points are done by tapping arrows on the left and right edges of the screen. The aim of the game is to defeat all attacking opponents before their attack diminishes your life bar. The game initially follows scenes and characters from the latest movies (The Force Awakens and The Last Jedi). Classic episodes and characters and be unlocked through level progression. Joining groups for multi-play and online discussion are also possible though the “Guild” section – thus, this game is not recommended for children under 13.

This game is quite well designed and provides smooth playability. However, as with many apps currently available, level progression is delayed once you reach a certain point (unless you purchase more crystals or replay existing levels to unlock features). The current reviewer played the Campaign for a fair amount of time and could not progress past mission 5 (in the second level) because a certain hero had not been unlocked yet. In the absence of paying to play, the reviewer spent a lot of time playing all areas of the game to unlock the required hero, but was unsuccessful. The reviewer predicts that it would take at least 5 – 6 hours of game play to unlock the hero to progress further. Those with a lack of patience and resilience may opt for the paying option. Noting that the cheapest option for gems is currently $7.99 for 80 Gems (and the dearest - $159.99 for 2,500 Gems) parents may need to exercise some caution around settings that allow purchases without a password entry.

As the app includes scenes from all of the Star Wars movies as well as new fighting and scary scenes, there are several opportunities for players to be exposed to violence and scary material.