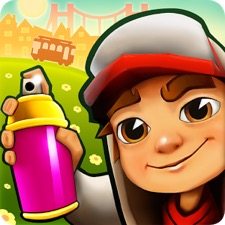 Subway Surfers is an endless runner game where players must run away from authorities on a busy train route. Gross motor and fast reaction time skills are required to play. Caution: Mild violence, criminal themes, advertising and Facebook connectivity. Not recommended for children under 13. Parental guidance for children aged 13 – 15.

This review of Subway Surfer was completed by the Australian Council on Children and the Media (ACCM) on 11 February 2017.

This review of Subway Surfer contains the following information:

Subway Surfers begins with the main character illegally spray painting the side of a train. Upon tapping the screen, a guard or police officer appears and the main character starts running away (into the screen). Players must run along the train line, dodging fast moving on-coming trains (and running along the tops of them) whilst gathering collectables such as coins and special items. Coins can be used to buy new characters and hover boards. Keys can also be collected – which allow the player to continue the current run if they get caught.

The aim of the game is to run as far as possible without hitting a train or object and getting caught by the police officer.

All movements are made by swiping the screen (move left and right, up = jump and down = roll under). Only gross motor and fast reaction time skills are required to play. Due to the criminal nature of this game (and saturated advertising and Facebook features) ACCM does not recommend that children under 13 play. Parental guidance is recommend for children aged 13 -15.

Some parents may view this game as glamorising breaking the law. The title screen shows the character clearly knowing that he shouldn’t be vandalising the train with graffiti – as he cautiously looks around between sprays. Further to this, the collectables along the train lines come dangerously close to speeding on-coming trains. As this game is quite bright and colourful, with cute looking animated characters, this may trivialise criminal activity for some.

Facebook is a prominent feature of this game. Not only are top scores instantly compared with other Facebook users, but it is frequently suggested that players connect to Facebook to complete with other friends and earn bonuses. Clicking on the “connect to Facebook” feature does require a password, but there is also an option to create a new account.

The following items can be purchased:

There was no gambling within the game itself, but some of the advertising pop-ups featured gambling games.