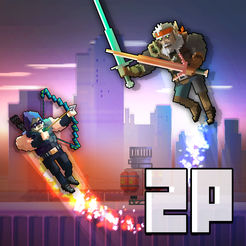 Super Hero Fight Club is an arena - fight to the death style game. Players need good co-ordination and timing to play. Caution: gambling elements – not suitable for children under 18.

This review of Super Hero Fight Club was completed by the Australian Council on Children and the Media (ACCM) on 23 August 2018.

This fighting game places the player in an arena style room where they must defeat the other player by flying around and using assorted weapons. Each new room has different conditions in which to defeat the other player, and each new game provides different avatars with varying weapons and abilities. Movement is achieved by holding the left and right buttons in co-ordination to either fly left, right or straight. Weapons activate automatically. The aim of the game is to defeat the opponent using that level’s goal (e.g. survive longer than 14 seconds, etc.). Wins earn the player gold coins and “play symbols” (or right pointing arrows), which can be used to buy things such as new players and rooms. Players can either verse the computer or other real players.

Parents may be concerned with a couple of the game’s main features. Firstly, there is a “lottery” feature (it’s actually named that), where players can use their virtual coins to spin for a prize. Each spin does obtain a prize, however some prizes are common and others are rare. As players can purchase virtual coins with real money, this represents a gambling activity where players spend money on chance – and may not get the rare feature that they were hoping for. The coins are also referred to as “Likes” in the game and resemble a “Like” symbol from Facebook. Too many spins in a short amount of time will result in loss of “Likes” until you cannot spin anymore. Free spins do accumulate over time, but many children may be inclined to purchase more “Likes” (coins) as obtaining “Likes” has become to be perceived as advantageous across many social media platforms. This game also includes alot of ads. Some which pop up without notice and others which you can watch to earn benefits. Many of these ads were for poker and gambling games.

As noted above, there is a lottery spinner where players could lose real money by not getting the spin that they wanted and hence encourage buying more and spinning more.

Many random ads for other games and earning benefits if you watch them.