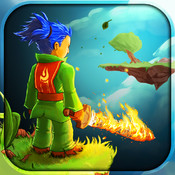 This review of Swordigo was completed by the Australian Council on Children and the Media (ACCM) on 29 April 2014.

This review of Swordigo contains the following information:

Swordigo is a fantasy role playing platform game, where the player must find his mentor by completing quests and defeating evil creatures.

In Swordigo you are a young magician’s apprentice who sets out on a quest to save his master and the town from evil creatures.  There are buttons for the basic controls used in the game which are: walk forward, walk back, jump, swing sword, pick up object and cast a spell. By using these controls the player must complete different levels by killing creatures, finding new locations and killing bosses (see violence section for more detail).

The player starts with five lives and when you get hurt by a creature you begin losing lives. If you lose all your lives the game is over and you return to the beginning of the level. There is also a recharge bar shown on screen. After you use magic the player must wait for the bar to recharge before magic can be used again. At the end of each level the player gets a choice to upgrade their magic, their sword strength or the amount of lives they have.

The player starts in the town, and as they go through each level a new location will open up on the map. The player can navigate to between these different locations by using portals. The portals also act as a save point in the game. This is where the player will return to if the character dies.

Throughout the game you can collect coins which are hidden in barrels, chests and plants. In the town there is a shop where the player can use these coins to buy items such as swords and healing potions. The town also has a healer’s house where the player can go to restore all of their lives.

This game can help develop a child’s problem solving skills as many of the levels involve having to complete tasks before the character can move on to the next step.

The player can buy a guiding compass for $2.49, which helps the player find their way to the next task.

The game connects to OpenFeint if you are playing on an Android or Game Centre if you are playing on an Apple device.  These platforms are online communities where you can share your scores and connect to your Facebook page. However, you can choose to restrict OpenFeint or Game Centre on your device. The main menu of the app also has Twitter and Facebook buttons which will link you to the developer’s pages.

The player is encouraged to destroy objects such as boxes and plants in order to find coins.

Violence and Scary Material: The game involves a lot of animated fantasy violence. Swords are seen as valuable items in the game and they are frequently used to kill evil creatures. Some of these creatures may be scary for younger children. These creatures include fire bats, charging rhino creatures, plants that throw darts and other frightening creatures which cause harm to the character. The game also includes magical violence. To defeat many of the threatening monsters the character must also use spells such as a magic fire bolt or a magical bomb explosion.