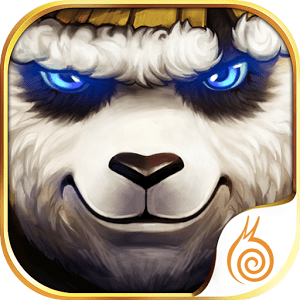 This review of Taichi Panda was completed by the Australian Council on Children and the Media (ACCM) on 2 October 2015.

This review of Taichi Panda contains the following information:

Taichi Panda is a role-playing dungeon crawler that involves progressing through areas and fighting enemies of increasing difficulty. The objective of the game is to battle opponents, defeat bosses and gain rewards in the form of coins and upgraded weapons/armour. Visual and motor skills assist in gameplay.

When the app is opened, players are asked to sign in as a Guest, via Facebook or through Google+. After this, players are shown five different characters from which to select one to play as. These characters are armoured, and there is a range of men, women and even a large panda bear. The men appear to be wearing a significant amount of heavy armour, whereas the women are wearing more tight-fitting armour that displays their small waist, legs and upper chest region. Each of these five characters can be clicked on to see a small description. For instance, the female Treasure Hunter has a description stating this character is: a trained assassin. Wielding a blade in each hand, she’ll take on any foe to get their treasure.

After a character and username is chosen, players are taken to an overhead view of a grassy environment. They are then presented with a female character that acts as a trainer and guide in explaining the instructions for gameplay. Players are told to use the left-hand joystick to move their character. There is also an attack button in the right-hand corner. Players are able to explore the area freely, but quickly run into several monsters. They must move around with the joystick and attack the monsters until their health bars reduce to zero. There is also a special attack button that does additional damage. The game then introduces players to a boss, in the form of a Rage Ape. The boss has a larger health bar, which is positioned at the top of the screen. It is necessary to utilise multiple special attacks in order to defeat the boss, as well as move around to avoid being hit by the boss’ attacks also. Before defeating the Ape, the player’s character states ‘Just watch me pound them into flour!’, which, coupled with the animated violence, may prove inappropriate for some younger viewers. After the battle, players level-up and receive rewards in the form of gold stars and gold coins. They are also given a selection of 3 mystery cards to choose from, each of which has a bonus item behind it.

After this, players are taken to their central home location, Vallar, and informed that they should check their inventory. Here, they are able to equip armour and view the defence, damage and health stats of individual items. Players are also able to upgrade armour here, or sell extra pieces for in-game currency.

There is a quest inventory for players to browse – this offers missions to work through and complete, and thus receive rewards for. These quests centre around battles. Before a battle is started, players are able to view the rewards they will receive upon completing it. They must then run through the dungeon area, battling enemies as well as the final boss. Players will often loot items off the boss after defeating it. Players can additionally unlock skills, which enable them to complete more complex and effective attacks during battle. Each skill has certain costs to utilise and cannot be used repeatedly without a brief break. Skills cost in-game coins to learn.

As players progress, the enemies grow stronger and players are required to have stronger weapons to defeat them. During battle levels, players are able to gain coins from the monsters they kill in addition to finding chests scattered throughout the dungeon. These assist in upgrading weaponry and armour.

The app also contains a user menu on the side of the device screen. This houses a User Centre with a link to customer service, a forum (with subcategories for things like Ideas and Suggestions, Off Topic, Fan Creations, General Help and Support), a link to the game’s official website, as well as a Strategies guide (including topics such as Boss Guides, Battle Drops, Pet Guide, and General Guide).

At level 20, a Guild option is unlocked where players can join in in player-versus-player battles, as well as play cooperatively alongside other players online. Playing online with others enables individuals to take on harder bosses successfully.

The app may require supervision for younger players, with horror-type themes and imagery during the cut-scenes, as well as a highly sexualised presentation of female characters (see Gender Stereotypes and Sexual References), and mild animated violence within the card battles.

When the app is opened, players are asked to sign in as a Guest, via Facebook or through Google+. At the end of levels which have been succesfully completed, players are also encouraged to share their progress with others via social media websites such as Facebook – they are given an incentive to do this in exchange for coins.

At level 20, a Guild option is unlocked where players can join in in player-versus-player battles, as well as play cooperatively alongside other players online. Playing online with others enables individuals to take on harder bosses successfully.

The male characters that players can select appear to be wearing a significant amount of heavy armour, whereas the female characters are wearing more tight-fitting armour that displays their small waist, legs and upper chest region.