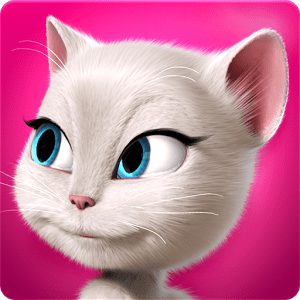 This is a simulation game in which players chat with a Parisian cat called Angela. Caution: in-app purchases, online interactivity, advertising, gambling device

This review of Talking Angela was completed by the Australian Council on Children and the Media (ACCM) on 1 April 2014.

This review of Talking Angela contains the following information:

This game is one of a series of talking pet games. In this game, Angela is a Parisian cat seated at an outdoor cafe. Players begin with an allocation of coins, with which they can buy accessories like hats, handbags, makeup and glasses for her. Players can also buy gifts for Angela, which include drinks. Angela can feed the birds. Players can pat Angela which makes her giggle and wink.

The game can be played in either Child or Adult mode. In Child mode, Angela will sometimes speak to the player and will repeat what the player says to her. In Adult mode, text-chat is enabled - players can ask Angela questions and she will reply. Angela may also ask the player questions. Angela may ask players if they want to do a quiz – topics may include movies and celebrities. It is quite easy to move from Child to Adult mode, by tapping on the smiley face – no password is required. Some parents may be concerned about the text chat feature.

Coins can be purchased for amounts ranging from $0.99 to $23.81, which will also stop advertising.

A wheel of fortune was presented with the chance to win extra coins for a free spin. There was no option to buy additional spins. Players can earn free coins by completing an offer, which may be to install and play slots and casino simulated gambling games.

An ad for a bank was presented. Ads are presented for other games, including war style games. Free coins can be earned by subscribing to the Talking Friends newsletter or watching video ads for other games. Players can connect to Angela’s website and to a website to buy related toys and items.

One of the items players can buy for Angela is “Flirty Makeup”. Angela frequently winks at the player. In Adult mode, Angela will discuss love and dating, including kissing. Some of Angela’s comments and responses may be considered flirtatious. Players can earn free coins by completing an offer, which includes one to install an online dating app.

An icon in the app can connect players to Talking Tom YouTube videos – the comments may contain inappropriate language.

After drinking Night Nectar, the screen goes dark and many eyes appear. When the normal café scene comes back, Angela commented “Did you just touch me? Behave yourself!” When asked if she tells lies, she replies “Mm hmm, from time to time”. An example cited in reviews is that (in Adult mode) Angela discusses that she has been to a clothing swap party and swapped clothes with her boyfriend Tom.

Violence and scary material: Free coins can be earned by watching video ads, which may include war style games.

Use of substances: Angela is seated at a Parisian street café. Players can buy her a cocktail-style drink, which she drinks very quickly. The drinks have names such as Lightning Shot and Giggle Juice. After drinking Giggle Juice, Angela pulled funny faces, giggled, winked and commented “This juice certainly makes my tongue loose”.

Other: Free coins can be earned by subscribing to Talking Friends newsletter or receiving a daily Angela fortune cookie. An icon in the app can connect players to Talking Tom YouTube videos – the comments may contain inappropriate language and children may view other videos.