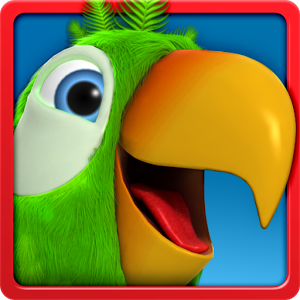 Talking Pierre The Parrot is an interactive children’s app. Caution: In app purchases and frequent advertising

This review of Talking Pierre The Parrot was completed by the Australian Council on Children and the Media (ACCM) on 4 August 2016.

This review of Talking Pierre The Parrot contains the following information:

All features of this app were investigated.

Talking Pierre The Parrot is an interactive children’s app. There is no central objective, but players are provided with a range of options in regards to speaking with Pierre such as playing with him and watching him interact with various objects. The skills required to play the app are predominantly motor skills.

When the app is first opened, players are asked to enter their year of birth – it then offers them the option to ‘Use the app in Child Mode’. If players select ‘Yes’ to this, they are shown a pop-up box ‘For Grown-Ups’ and must enter the numeric digits corresponding to words such as ‘Three, Two, Three’. It then asks users if they would like to remove advertisements within the app, which can be done for an in-app purchase of $2.99. If players close this and opt not to remove ads, a full-screen static advertisement is immediately shown – it must be manually closed with an ‘x’ in the top left-hand corner and advertises Foxtel for businesses. Other full-screen ads advertise things such as the company Screenwise, the International Institute of Technology, etc. Furthermore, there are banner ads placed along the bottom of the screen during gameplay itself – these advertise things such as NRMA, Road Vision (a lighting/LED company), etc.

Players are then brought to the central gameplay screen – this shows a large green animated parrot in the centre of the screen, sitting on a kitchen bench top. There are multiple icons positioned around the edges of the screen. A small letter ‘i’ offers users the ability to enter back into Grown-Up Mode. When this is done, two additional icons appear. One icon takes users to a long list of videos on the developer’s Youtube page – these are generally several minutes long (although some extend up to 20 minutes) and contain stories such as ‘Talking Ginger’s Story Time: Around The World’. These animated videos do not appear to contain inappropriate content and seem to be appropriately themed. Adults are also given an option to record the footage of whatever users make Pierre do and to then share this via social media (with options such as Facebook, Gmail, Youtube and WhatsApp all provided).

There is also a small icon of a different animated character in the top right-hand corner, which takes users to a range of static advertisements for similar apps by the same developer. These can be scrolled through and then must be manually closed, or players can opt to click the ‘Play for free’ option on each of the ads. Those advertised include apps such as ‘My Talking Angela’, ‘My Talking Tom’, ‘Talking Tom Gold Run’, etc.

There is a small icon of a kitchen tap near the bottom of the screen. When players attempt to click on this, however, they are shown a pop-up suggesting that they make an in-app purchase to ‘unlock all animations and bonus stuff’ in addition to removing the ads within the app (for $2.99). There is a ‘Free’ option here also, which must be unlocked by an adult. This takes users to an ‘unlock for free’ section where they are able to ‘complete an offer to unlock all animations’ – these include things such as: ‘watch the Dove Beauty On Your Own Terms video until the end’; ‘Install DragonSoul, open and play to level 7’; ‘Install Coin Dozer Casino, open, and start playing’. Such apps appear to contain gambling content and animated violence and would be inappropriate for children. With access being granted simply by entering three numeric digits, younger users could access inappropriate content.

One of the other icons present is of a small broken mug – when players tap on this, Pierre the Parrot pulls an item out of the sink and throws it towards the camera, where it makes a shattering/breaking noise. The third icon along the bottom of the screen shows an image of a tomato – players can tap this to throw tomatoes at Pierre, which land all around the kitchen area, smash, but then disappear. When players do this and miss Pierre himself, the parrot turns around, waves his bottom at the screen and exclaims ‘Na nanana na’. The fourth icon shows an animated guitar and players can repeatedly tap on this to watch Pierre play an electrical guitar. Lastly, there is an icon showing a blender, which when tapped causes Pierre to push the ‘On’ button on the blender next to him. This proceeds to make a blending noise and must be tapped again to turn off the noise.

If players speak aloud to Pierre, he is able to repeat words back to players. Pierre will repeat most words, including coarse language. It is also possible to swipe a finger over Pierre’s body, and have small love hearts float into the air around him.

The app appears to be quite limited in the scope of gameplay and does contain frequent advertising.

Yes: Within the Grown-Up section of the app, users are asked if they would like to remove advertisements within the game. This can be done for an in-app purchase of $2.99.

Adults are given an option to record the footage of whatever users make Pierre do and can then share this via social media (with options such as Facebook, Gmail, Youtube and WhatsApp all provided).

The app contains advertising for Outfit7’s products via Youtube Videos and additionally provides links to the developer’s websites and other apps. These include apps such as ‘My Talking Angela’, ‘My Talking Tom’, ‘Talking Tom Gold Run’, etc.

There are also frequent full-screen static advertisements shown regularly during gameplay – these must be manually closed with an ‘x’ in the top left-hand corne. They advertise things such as Foxtel for businesses, the company Screenwise, the International Institute of Technology, etc. Furthermore, there are banner ads placed along the bottom of the screen during gameplay itself – these advertise things such as NRMA, Road Vision (a lighting/LED company), etc.

No game playing behaviour that may be of concern to parents was found during the review of this app, however the app does not moderate verbal interactions with Pierre.