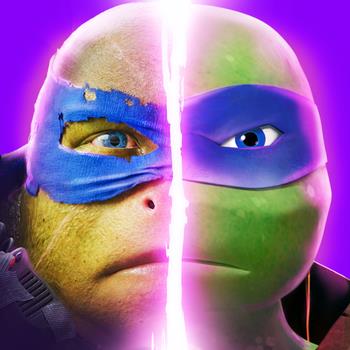 This review of Teenage Mutant Ninja Turtles: Legends was completed by the Australian Council on Children and the Media (ACCM) on 18 July 2016.

Teenage Mutant Ninja Turtles: Legends is an action packed, fighting app game based in the Ninja Turtles universe. The player follows Leonardo’s instructions to form a team of ninja characters to fight the evil Kraang and save the other ninja turtles.

Teenage Mutant Ninja Turtles: Legends starts with Leonardo’s ninja turtle brothers being kidnapped by Kraang. The player (who plays as Leonardo) must recruit other ninja turtle allies to help Leonardo fight Kraang and his evil minions, and save Leonardo’s brothers (see Violence for more details).

The app begins with a tutorial which explains how to play the game. In a battle, the player’s characters and the evil villains take turns fighting each other. The player chooses which characters they want to use to fight, what attacks to use and which villain to attack. Each character and villain have a health bar which reduces after they are attacked. If the health bar reaches zero, the characters dies/disappears. If the player wins a battle they gain points and items which help them level up.

The app is primarily an action/fighting game without any educational benefit. However, the player may need to use some problem solving skills to determine which characters would be best to fight which villains. Due to the cartoon violence, this app is recommended for players 12 years and older.

No advertising was found but the game is linked with the Teenage Mutant Ninja Turtles: Out of the Shadows movie (PG) see ACCM KBYG review. The players are able to watch the trailer for the movie on the app and there are some characters that are connected to the movie.

No sexual references were found, however, some of the male characters are shown as having overtly large muscles and one of the female ninjas is in a skin tight suit that accentuates her breasts.

Heck, Hell, Idiot –The characters threaten and insult each other before some battles.

The main aim of this game is to attack and kill bad guys. This app game includes many weapons such as swords, guns and knives. No blood or gore is shown when a character dies, they just disappear and become available for use in the next battle.

The characters run around in dark alleys and other scary and suspect places. Parents should discuss with their children the importance of being safe and aware of their surroundings.

Violence and Scary Material: The main aim of this game is to attack and kill the bad guys. This app game includes many weapons such a swords, guns and knives. However, there is no blood or gore, and when a character dies they just disappear and you can still use them next battle. Also, many of the monsters that the player fights in the game may be scary for young children.