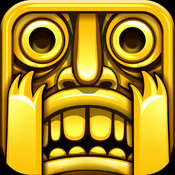 This review of Temple Run was completed by the Australian Council on Children and the Media (ACCM) on 27 March 2014.

This review of Temple Run contains the following information:

This is an endless runner style game, where the player runs along a path, dodging obstacles, collecting coins and power ups.

Players start as a male character, called Guy Dangerous, running out of a temple being chased by black ghoulish creatures. There are other characters which can be unlocked or bought with coins. The player uses their finger on the screen to guide their character. The player must avoid obstacles and jump over gaps in the path, collecting coins and power ups along the way. The further they run, the more points they get. If the player crashes or is caught by the creatures, they can run again, starting at the beginning. Coins can be used to buy utilities (such as resurrection wings), characters, wallpapers and power ups.

The game has a list of player objectives which earn extra rewards.

Players may crash into objects or fall into the water, but there is no real consequence, the player can start again. Players can earn free coins by installing and running other games, including war style games.

Violence and scary material: The player is being chased by dark, ghoulish creatures, which may frighten young children. If the chasing creatures catch the runner, they receive a message like “You made a tasty snack”.