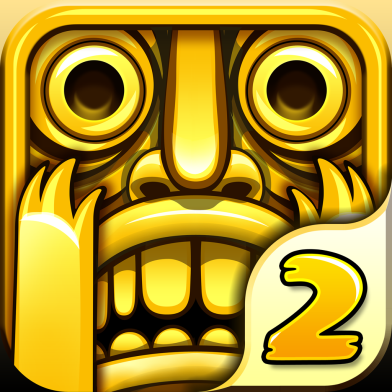 This review of Temple Run 2 was completed by the Australian Council on Children and the Media (ACCM) on 6 April 2014.

This review of Temple Run 2 contains the following information:

In this Indiana Jones style endless runner game, the player must test how far they can run by jumping over or sliding under trees, temple ruins and spinning blades.

The game begins with the character ‘Guy Dangerous’ running out of a temple after he has stolen an ancient idol. He is being chased by big, black, creepy monkey creatures. The player then takes control of Guy and they must swipe up or down to avoid obstacles. These obstacles are often fallen trees or sections of the path that have fallen away. However, some hurdles are more violent (see below in Violence and scary material for more detail).

Another objective of the game is to collect coins. When coins appear along the path, the player can tilt the device to collect them. With coins you can buy power-ups, such as invisibility or speed, and unlock more characters (see below in Gender Stereotypes and Sexual references for more detail on extra characters). Along the path you can occasionally collect gems, which gives you extra lives.

The game ends when you either fall off the path, the monsters catch up with you or you run into an obstacle. The end screen shows your score as well as a picture with a pithy comment about the character’s death. Some examples are “knocked your socks off!” when you hit a tree or “I eat explorers like you for breakfast” when the monkeys catch you.

Temple Run 2 is not meant to be an educational game. A small amount of strategy is involved (choosing what to spend your coins on) but it is mostly a skill based game.

The player can connect to Facebook or Twitter to challenge their friends or post their scores online. There is also the option of liking the app on Facebook, which earns the player one gem. On the app you can also connect to OpenFeint (for Android) or Game Centre (for Apple).

None found during the review period.

Occasionally players are presented with advertisements for other app games.

Parents should be aware that the game begins with the character stealing an idol from the temple. However, this behaviour does not continue throughout the game nor is it the emphasis of the app.

Violence and scary material: Some aspects of this game may be scary to young children. The game begins with a loud growl from the monsters. When the character dies, a faint scream is heard but both these sounds can be avoided if the sound is turned off.

Being chased by these monsters may be scary for some players. However, the monster only appears for a few seconds at the beginning of the game and only appears again for a moment if the character stumbles while running. A few of the obstacles which the player encounters are violent. These include fast spinning blades and occasional fire surges.