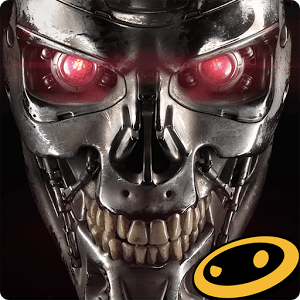 This review of Terminator Genisys: Revolution was completed by the Australian Council on Children and the Media (ACCM) on 4 July 2015.

This review of Terminator Genisys: Revolution contains the following information:

Terminator Genisys is a third-person shooter app where players must battle against the Machines in the year 2029. The objective of the game is to battle and kill enemies, whilst also upgrading weapons and unlocking new missions. The skills required are motor skills, as well as quick reflexes, good aim and timing skills.

The app begins with an animated video and a voiceover that states: ‘In 1997, the world ended. Judgement day. Controlled by Skynet, the Machine took over. We’ve been fighting it ever since. The Resistance is all that stands between mankind and extinction. It’s 2029, We’ve been at war for 32 years. It’s time to play your part.’

Players are then met by a woman named Captain Mariam. She explains that individuals are playing as a character named Alex Lopez. They are told they need to sneak into the Northeast gate and let the Resistance forces in. Players are then placed into a third-person battle environment. They are told to drag their thumb across the screen to aim their large gun. There are two machines to kill and players can either tap an icon on the righthand side to pop up from their covered position and shoot, or continuously shoot the enemies by holding this button down. After this is done, players are told that they have completed the mission. Players are then provided with a new mission from John Connor – to use the grenade launcher at medium range. Players are told that they need to create a distraction and destroy one of the fuel pods. When players are in battle against the machines, both players and machines have health bars that will deplete upon being hit. The game presents enemies dying quite realistically, with blood spraying and their bodies falling to the ground.

Subsequent missions require different weapons – for example, a sniper rifle for long-distance or a shotgun for short-distance combat. In order to obtain these additional weapons, players must purchase them using the in-game cash they have accrued. Players can zoom in with a scope when using a sniper rifle and must hit enemies from a distance in order to kill them. Players are additionally able to upgrade their weapons, which increases the attack power of that weapon as well as unlocking new missions.

Players are able to utilise homing rockets, grenades, EMPs and other destructive weapons that can kill groups of enemies with a single shot. The missions are quite brief but very realistic in nature and are centred around violence/killing the machines.

This game incorporates in-app purchasing, which may encourage children to spend real-life money in a potentially reckless manner. The realistic violence may also pose a risk for younger players, with the app demonstrating attacks and deaths in its animated battle scenes.

Players are able to obtain 1 gold bar for every video advertisement that they watch. These are full-screen, 30-second long video advertisements that cannot be closed until completed. They advertise other war apps such as ‘Empires and Allies’, ‘Clash of Clans’, ‘League of Angels, and ‘Fire Raiders’ (containing violence and sexually suggestive material).

The app also contains full-screen pop-up advertisements that promote the sales within the app itself (for example, 15% of purchasable weapons, specials and sales, etc). These must also be manually closed. Additionally, the app contains full-screen pop-up advertisements for the film that the app is based on – Terminator Genysis. The ad states that the film will be released on July 1st in 3D, and encourages players to purchase tickets.

Parents may find the glorification of violence quite worrying, and supervision is recommended.