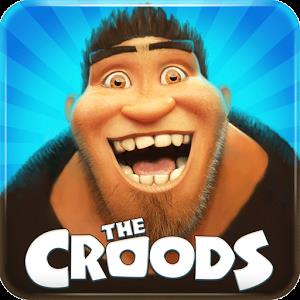 The Croods is a timer-and-quest app based on the animated film of the same name. Caution: in-app purchasing.

This review of The Croods was completed by the Australian Council on Children and the Media (ACCM) on 27 June 2014.

This review of The Croods contains the following information:

The Croods is a timer-and-quest app that follows the lives of a prehistoric family as they hunt and gather items. The objectives of the game are to build structures, trap creatures and tame them into pets and store produce. There are limited skills required when playing the game, although effective strategy and resource management may be useful.

When the app is installed and opened, players are brought to a home screen which offers them the option to either play as a guest, or to connect to Rovio (by registering or signing in with a Rovio account) and saving their game online. Players begin in a prehistoric jungle-like environment with a Neanderthal suggesting that they go on a ‘Hunt and Gather’ quest. He is surrounded by his family members, including his grandmother, partner and children. They are the characters from the animated feature film The Croods and players are encouraged to tap their individual icons in order to hear dialogue from them.

When hunting for things such as berries, it is possible to use Grug’s inventor to put the collected items to use. For instance, berries may be used to trap mysterious creatures. Traps may be built by using more in-game currency (which takes the form of coins). This ensures that players do not need to wait for long periods in order to build things. It is also possible to use blue crystals as a form of currency in the game, which may also be used to speed up the process of building and creation. Players are continually prompted within the game to ‘Use those crystals to speed things up and see what happens!’ In regards to in-app purchases, blue crystals may be bought in a range of packages: 200 crystals for $4.82, 700 crystals for $14.49, 1500 crystals for $28.98, and 3200 crystals for $57.97.

After creatures such as Molarbears are captured, it is suggested that they spend time in the farming pen and that they be fed some food also. Feeding the creatures tames them into pets that then require a home, care and support. After feeding Molarbears berries, they provide the human characters with carrots.

Players are then provided a list of ‘chores’ from Grug’s grandmother – these quests offer rewards in the form of coins and experience points. These chores are things such as ‘Play with your Molarbear’ or ‘Clean your Molarbear’. When players level up as a result of completing quests like these, they receive coins and crystals in return, as well as multiple reward items  (such as homes for other various unlocked creatures, or items for existing ones). When caring for the creatures, it is possible to feed them soup in order to make them level up themselves – doing so increases their speed in relation to building things.

It is also possible for players to view their inventory by looking at what The Cave is growing and producing at any point in time. The Cave has a limited capacity that must be upgraded by spending coins – for instance, although it only has room for 50 berries and 50 carrots initially, upgrading the storage space allows room for 75 of each. Additionally, players have the option to visit a friendly neighbour and explore their homes for rewards and items. This may be done five times per day. It is also possible to invite friends to play the game via Facebook, with the game suggesting that players ‘Invite your Facebook friends to play and discover daily treasures in their worlds’.

The game encourages spending money by incorporating very significant time lags in regards to building and undertaking activities. Some actions will take between minutes and hours to be completed but players can skip the wait by using money to purchase in-game crystals. This may promote a culture of impatience and reckless spending amongst younger players.

Players are encouraged to invite friends to play the game via Facebook, with the game suggesting that players ‘Invite your Facebook friends to play and discover daily treasures in their worlds’.