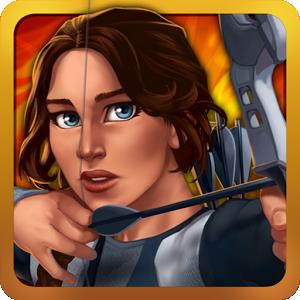 This review of The Hunger Games Adventure was completed by the Australian Council on Children and the Media (ACCM) on 23 June 2014.

This review of The Hunger Games Adventure contains the following information:

The Hunger Games Adventure is a quest-and-timer app that is based on the novels and feature films of the same name. The objective of the game is to craft items and buildings within the world of Panem, whilst also collecting coins, credits and experience points. Limited skills are required in playing this game, and consist mostly of strategy and resource management.

The app begins by transporting players to Panem, and the character of Katniss Everdeen provides some background information on the journey players are about to undertake. She states ‘As we near the fence surrounding District 12, the kid walking beside me hesitates. I’ve agreed to venture into the woods with this orphan as a favour to Gale. Years ago, I had learned to survive against the odds. For Gale, I’ll help this orphan do the same’. Katniss then walks alongside the player’s character within what appears to be an abandoned forest area. Katniss informs the players that The Peacekeepers almost spotted them both clearing the fence, and points them in the direction of a bow and arrows (which have been stashed within a log, hidden away). Players must tap on the wooden log in order to search it – doing this costs players 1 point of energy, having begun with 15 points. Energy replenishes itself within several minutes.

Soon after this, a large vulture appears and players are encouraged to tap the bird (and utilize 2 points of energy) in order to fight it. The violence depicted is highly animated and non-graphic as the player’s avatar shoots several arrows at the large bird.

Players then travel to a safer area known as Forest Escape, where Katniss encourages them to set up and lay down several traps. Having begun with $100 of in-game currency, players can opt to purchase a $65 makeshift trap with the money they have been provided. Clicking on the small tick will begin the crafting process – players may wait several seconds to craft the object, or may skip the waiting period by using a small number of coins. This continues later in the game, where players have the option of using coins in order to skip waiting periods of several hours when upgrading items or objects.

New quests appear in the top left-hand side of the screen, and players may click on them in order to activate them. They are given the option to choose from multiple quests, such as ‘Take the game meat from Katniss at The Bakery’ or ‘Give the game meat to Peeta at The Bakery’. Players are transported to various locations where they are guided by green arrows that indicate where they should tap next in order to progress through the storyline and the quest.

In order to complete certain actions, it is necessary to use ‘Credits’ – these are small coins which act as another form of in-game currency. Although players begin with 50 of these at the start of the game, they require more for the quests as the game goes on. These are sold as in-app purchases in packages, such as: 80 credits for $0.99, 450 credits for $4.99, 1000 credits for $9.99, 2050 credits for $19.99, or 4200 credits for $39.99. It is also possible to earn free credits by viewing a range of advertisements for other external apps, by downloading and installing other apps, by playing particular apps to a specified level, or by registering for free or paid trials. Each of these options will offer different numbers of credits (ranging from 1 or 1, up to 382 credits).

Within the settings menu of the app, players have the option to purchase The Hunger Games novels on Amazon. They may also sign in via Google+, or click on a link which takes them to ‘Panem News’: this contains an advertisement for the new Hunger Games feature film which may be viewed in HD on Google Play.

Players can also access their Inventory, which contains different categories of items: Consumables, Materials, Quests, Seals and Storage. There is a separate store where players may purchase new in-game items – some of these items are level-locked, and may only be accessed when they reach a certain specified level. It is also possible to craft buildings, such as Workshops, Cottages or Kitchens. Each of these has individual uses and offers certain item rewards in return.

Within the app, it is also possible for players to edit and customize the appearance of their avatar – they may choose from a select range of heads and sets of hair, clothing, as well as skin tones.

This app frequently prompts players to use in game currency, which can be purchased with real world money, to skip waiting periods and gain rewards.

Players are encouraged to connect via Google+, although the rewards and benefits of doing so are not explicitly stated.

The app allows players the option to view advertisements (full-screen videos which must be manually closed) in order to gain in-game credits. These ads are for external apps/games.

The app flouts stereotypical gender roles by having a strong female protagonist who is not sexualised. Katniss is a strong, brave and intelligent women that would be a good role model to younger players.