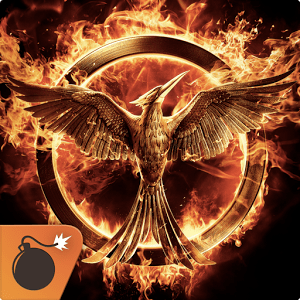 This review of The Hunger Games: Panem Rising was completed by the Australian Council on Children and the Media (ACCM) on 3 October 2015.

This review of The Hunger Games: Panem Rising contains the following information:

The Hunger Games: Panem Rising is a turn-based role-playing game that involves utilising card characters to battle opponents. The objective of the game is to unlock as many new recruits as possible, and to use these characters in battles as part of a squadron to fight enemies, thus reaping financial and resource-based rewards. There are limited skills needed, but visual and motor skills assist in gameplay.

The app opens to an image of Katniss from The Hunger Games, with dialogue that states ‘Many years ago, Panem’s thirteen districts rose up and rebelled against the Capitol and its oppressive leadership. Unfortunately, that revolution failed and resisted in the cruel, ongoing retribution known as the Hunger Games’. The image changes to a static picture of a town being destroyed by explosives, and the text describes that a second rebellion is beginning to catch fire, and unrest and open disobedience are spreading through all of the Districts. Players are told that the rebellion requires their help to defeat those who enforce the will of the evil dictator, Mr Snow.

Players are then able to select a district they are from, after which they are given a role-playing character card of a new recruit. The card displays the health and attack of a character, their level, the number of stars they have (which indicates skill level and rarity), and whether the player’s recruit is from Panem or the Capitol.

After this, players are introduced to a man named Haymitch who resides in District 13’s underground headquarters. They are informed that they will need to round up ‘some squad mates’, and must click on the ‘Explore’ button to visit another zone in order to find some. Exploring costs Endurance Points, but players are able to reap rewards such as coins and experience from completing exploration missions – endurance points also recharge over time. By exploring and taking on new recruits/character cards, players are able to level up. This brings rewards also, such as adding extra points to their Endurance bar.

When players explore, they run into other character cards to battle. Before a battle begins, players are shown two cards – their own recruit, and the opposing character card. Statistics for health and attack numbers are displayed on each. As the role-playing battle plays out, players merely watch as their characters attack the opponent – this is depicted as small explosions on the opposing character’s body, until they eventually lose all of their health and disappear off the right-hand side of the screen.
Players can also gain recruits by Enlisting them, which entails purchasing them with in-game coins. Furthermore, players can Upgrade their existing recruits. This is done by selecting one recruit, and using coins to enable another more skilled recruit to train the other. Once players are level 5, they can choose to join an alliance with other players, or to create their own alliance. This enables players to join forces with other players whilst they progress through the game.

In addition to the mild violence presented, there are mature references to individuals having passed away, such as when players receive a ‘Tribute Recruit’ and are told that ‘Though no longer with us, we can still honour their memory by wielding the power of their skills’. As a result, some of the content may be inappropriate for very young users.

Players have the option of messaging other players within a chat room. It is unknown whether this function is moderated or unmoderated. They also have a private message inbox where they can send and receive private messages, blacklist other specific players they do not wish to engage with, and receive notifications when they have a message waiting. This encourages players to chat with other Squad leaders across the world, to discuss tactics and other aspects of the game. Once players are level 5, they can choose to join an alliance with other players, or to create their own alliance. This enables players to join forces with other players whilst they progress through the game.